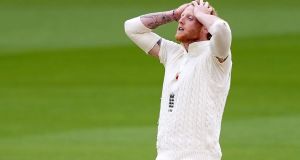 Ben Stokes has withdrawn from the remainder of England’s Test series against Pakistan. Photograph: Jon Super/PA

Ben Stokes has withdrawn from the remainder of England’s Test series against Pakistan for unspecified family reasons, with the all-rounder due to join his parents in New Zealand later this week.

England’s vice-captain has already had a huge impact on the summer thus far, leading the side against West Indies in Southampton and then helping set up the 2-1 series victory by averaging 90 with the bat and claiming nine wickets with the ball.

But after the dramatic three-wicket victory over Pakistan in Manchester on Saturday – a match in which he shrugged off a thigh injury to claim two late wickets on the third day - Stokes informed his teammates he will now be leaving the biosecure bubble and fly out to Christchurch to join his family.

Upon announcing the news on Sunday afternoon that Stokes will miss both Thursday’s second Test in Southampton and the third a week later, the statement by England asked that the privacy of his family be respected at this time.

The 29-year-old’s father, the former New Zealand rugby league player Ged Stokes, was hit by serious illness after arriving in South Africa before the winter’s 3-1 series victory before returning to New Zealand to continue his recovery.

It is clear that, much like Jos Buttler performing on the final day despite his father being taken to hospital the previous evening, Stokes also spent the duration of the first Test against Pakistan with issues away from cricket on his mind.

Saturday saw England add Ollie Robinson, the uncapped Sussex seamer, to the squad and though the absence of Stokes is a huge blow to their plans and affects the balance of the team, the hosts at least have another all-rounder in form following a man-of-the-man performance from Chris Woakes in Manchester. – Guardian