Trolls target Bernard Tomic as he goes into self-isolation 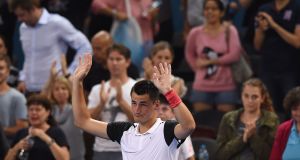 When Bernard Tomic announced he was the first player on the ATP tour to self-isolate after showing symptoms of coronavirus, the 27-year-old Australian was not drowned in universal sympathy.

The Covid-19 pandemic has loosened the worst and best instincts of humanity and Tomic, who could have been one of the outstanding players of his generation, endured mostly a blizzard of scorn after telling an Australian newspaper on Sunday: “Since Tuesday, I started feeling not right. I already had shortness of breath and my immune system was low and run down. I’m currently in Miami and isolated away from everyone, as advised. I’m yet to be tested for [COVID-19]but I have all the symptoms.”

He will not lack for expert advice close to home; his mother, Ady, was a biomedical scientist. Quite what his belligerent father, John, will tell him is another matter.

Tomic believes he may have been infected while flying to Florida from one of his favourite tournaments, Monterrey, where he lost against his compatriot Aleksandar Vukic in the third round. But most fans were not interested. Tomic, who rose to a career-high 17 in the world in 2016 and now wallows at 200, could not buy a friend.

The social media onslaught was relentless. “I think he’s just had dickheaditis,” said one. “Since when did he become Dr Bernard Tomic?” asked another. There were a slew of laughing memes and gifs, as well as abuse and nastiness. “Let’s hope he stays there forever,” was typical. One budding comedian observed: “Apparently he was lethargic, tired and could not chase the tennis ball. It was a wonder he was diagnosed at all, no difference to his normal behaviour.”

He has heard it for years. It was uncharitable, obviously, and, sadly, predictable. It confirmed what is obvious: memories can be short and unkind, especially when the target is a celebrity athlete with a history of entitlement and ordinary behaviour.

It should have been - and could have been - different. However, it was evident from the start of his career that Tomic was temperamentally ill-equipped to handle fame. He blundered from one minor public relations disaster to another, losing to players way below him in the rankings, and seeming not to care, as the money rolled in.

When Mischa Zverev blew him away in less than an hour-and-a-half in the first round at Wimbledon three years ago, he said he had no regrets, was bored and did not much like tennis. “Throughout my career I’ve given 100 per cent,” he said. “I’ve given also 30 per cent.” He then blew it up altogether: “Wouldn’t anyone want to take a job in . . . one of the biggest sports in the world and only give 50, 60 per cent and earn millions of dollars?”

His website has been dormant for years. The last result posted was his injury retirement after three games against Benoît Paire in the first round of the 2016 Italian Open. It was one of many such results, seen by his team as evidence of a failing body and zero focus, by his critics as a deficit of spirit.

On Facebook, he often showed his good side. His last entry, in February 2013, captioned a visit to a children’s hospital: “La Timone in Marseille this week, really enjoyed the experience - chatting and signing autographs with the kids.”

Not a lot has gone right for Tomic since he came through qualifying to take a set off Novak Djokovic in the quarter-finals at Wimbledon in 2011. That might have been his breakthrough moment, as fans thrilled to his languid game. He showed exquisite touches and bursts of lazy power but not enough resilience under pressure when Djokovic stepped on the gas. Still, it was something memorable for a teenager to build on.

In fits and starts, injury and hubris undermined his talent thereafter. Arrogance and ignorance did not help. He went from prodigy to Tomic the Tank Engine. Patrick and John McEnroe called him out at Flushing Meadows in 2012 when he collapsed spectacularly against Andy Roddick. Tomic responded: “That’s how I play. Do you have a problem with that?”

For all his flaws and wasted gifts, he surely does not deserve the vilification that has fallen upon him in a health crisis such as the one he is enduring now. “People need to take this super seriously,” he told the Sydney Sun-Herald, “especially at home in Australia. I don’t know how long I’ll be in isolation or when I can be tested.”

Tomic may not realise it but he has been isolated for many years. - Guardian