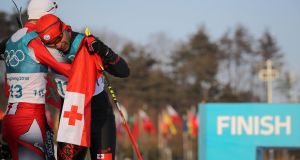 Pita Taufatofua of Tonga and Samir Azzimani of Morocco embrace at the finish line. Photograph: Reuters

Pita Taufatofua, the Tongan athlete known for his oiled up, bare-chested marches at Olympic opening ceremonies, produced a surprise performance in the 15km cross-country race: he did not finish last and he kept his shirt on.

After spending only 12 weeks on snow in his life, having seen snow for the first time two years ago, Taufatofua finished third last, nearly 23 minutes behind the gold medallist. Three other athletes did not finish the race.

“I’d rather finish towards the end of the pack with all my friends than be somewhere in the middle by myself,” he said after becoming only the second Winter Olympian from Tonga. “We fought together, we finished together,” he said.

Taufatofua has been spending much of his time since he arrived in Pyeongchang with other athletes from countries with low participation in winter sports.

Taufatofua waited at the finish line for the last two skiers to cross, and when German Madrazo of Mexico slid past the line waving a Mexican flag handed to him by a spectator, Taufatofua lifted him on to one shoulder in celebration.

“The 15km never worked so well for me: I always gas out by about the second kilometre,” Taufatofua said. “The hardest part was to try to maintain a pace – a slow pace but it’s a pace.” He had to fight the urge to go faster when he heard the cheer of the crowd, and he was certainly a favourite among those who waited until the end.

Taufatofua never thought he could win a medal, but the former youth worker was more interested in sending a message than standing on a podium.

“The truth is that I’ve had a short time on snow and I won’t medal,” he said at a press conference before the race. “But in four years someone from Tonga might, in eight years someone from the Pacific might, but more importantly people from the Pacific, these kids who are watching now, they’ll have access to something they never knew existed before.”

He plans to try to qualify for the summer Olympics in Tokyo in 2020 in a third sport, saying he was thinking about “something to do with water”.

Taufatofua recalled when Paea Wolfgramm won a silver medal in super heavyweight boxing at the 1996 Olympics. Taufatofua watched matches at a neighbour’s house at a time in Tonga when there was only one television for 100 families, he said.

When Wolfgramm returned to Tonga, Taufatofua and his friends lined the road to welcome him, with each boy holding a piece of paper with one letter of Wolfgramm’s name.

“As a kid you don’t really know, but you can feel,” he said.

As for his shirtless march at the opening ceremony in Pyeongchang, where sub-zero temperatures were a marked difference from the weather for his first appearance at the 2016 Rio Games, that too was meant to send a message.

5 Rory McIlroy: I think everyone should just be grateful Tiger Woods is alive