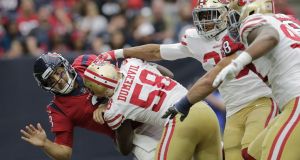 The lasting image of the 14th week of this NFL season won’t be the Bills and Colts romping in the snow or Cam Newton roaring through Minnesota’s secondary or Dak Prescott heaving touchdown passes over the New York Giants. The lasting image of a week that should be all about playoff runs is instead Houston Texans quarterback Tom Savage lying on the turf, his head having been smashed to the ground, staring blankly in the air with his fingers twitching uncontrollably.

This should have been a sign that something neurologically was wrong with Savage, that he should have been whisked far from the field. And yet the Texans medical staff apparently let him back on following a cursory exam that took less than three minutes. It took two incomplete passes for someone on the Houston sideline to realize something wasn’t right and Savage was pulled from the game and taken under the stands for a more extensive evaluation. He did not come back.

What’s clear is the NFL’s procedure for handling concussions is not working. Asking team doctors to diagnose concussions in quick exams held in tents behind the bench is probably not the best way to decide if a player is healthy enough to remain in a game. It pits the eternal dilemma of a team’s lust for winning against a player’s safety and is the same kind of shoddy medicine that has gotten the NFL into a head trauma mess to begin with.

This is the third time this season that a quarterback has been taken into the tent with what seems an obvious had injury only to be sent back to the field after exams that seemed barely longer than an eye blink. Last month, Seattle quarterback Russell Wilson dashed through a tent exam before quickly returned following a brutal hit to his chin and Indianapolis’s Jacoby Brissett returned to a game against Pittsburgh after wobbling to the sideline following a hit.

Savage’s return brought a swift reaction from Chris Nowinski, the founder of the Concussion Legacy Foundation.

While most fans may not know of Nowinski he is one of the most important voices on football concussions around. A former football player at Harvard and a professional wrestler whose career was cut short because of concussions, he worked closely with Dr Bennet Omalu, the Pittsburgh pathologist who discovered the link between head trauma and the degenerative brain condition, CTE. In fact, it was Nowinski who helped Omalu procure the brains of recently-deceased former players, speeding the movement to get the NFL to recognize CTE as a significant problem.

The final line of Nowinski’s text – “I would not let my worst enemy go through the 2017 NFL concussion protocol” – must sting. But his words have merit. Despite the glaring attention paid to repeated blows to the head in football games and long-term brain disease, the league is still not showing a desire to get things right.

It may be unfair to blame the team doctors who are nonetheless conflicted because of their arrangements with the teams. Since the doctors are on the sideline at games they don’t see the same replays we do on TV. They might not see Brissett go limp for a moment after being hit or see Savage’s twitching hands. But there needs to be better communication between them and those who do see these things. There needs to be more emphasis placed on keeping players from going back in games when it is clear those players should be heading to the locker room.

Football is a violent game. Those who make it their life’s pursuit know this. Anyone who signs an NFL contract today knows the risks. The information is out there. And yet at some point the bravado becomes foolish. Something has to be done to make sure the next Tom Savage does not go back into a game.

By the way, the Texans lost 26-17 to San Francisco on Sunday.

Niners quarterback Jimmy Garoppolo threw for 334 yards and a touchdown in San Francisco’s victory. It’s probably the last thing most people will remember from the day.