ICC conducting up to seven investigations into current match-fixing attempts 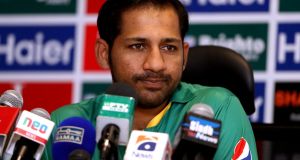 Pakistan’s Sarfraz Ahmed was one of three international captains who has reported illicit approaches in the past two months. Photograph: Getty Images

The International Cricket Council’s anti-corruption unit is understood to be conducting up to seven live investigations into fixing, with three international captains having reported illicit approaches in the past two months.

Of the captains, two names have already leaked. Pakistan’s Sarfraz Ahmed and Graeme Cremer of Zimbabwe have already been reported to have rebuffed offers from intermediaries and flagged them up to the relevant authorities within an hour. The identity of the third is yet to be established and the ICC do not comment in such instances.

Sarfraz, whose Pakistan side won the ICC Champions Trophy in June, was contacted before a one-day match against Sri Lanka in Abu Dhabi in October, while Cremer was reported to have rejected an offer by a former Zimbabwe Cricket board member to fix elements of their Test series against West Indies during the same month.

That such high-profile names are being approached is alarming – although their response is viewed as evidence the education programmes are working – while the number of live cases shows the size of the task facing the ICC’s new ACU general manager, Alex Marshall, who began in September after a long career in the British police force.

Of huge concern to the ACU is the proliferation of privately-owned micro-tournaments in the subcontinent and the Middle East, which feature local players and the odd recently retired “star”, and are seen as a possible entry-point for would-be corrupters into higher-level scams.

The money on offer is understood to range from €4,200 to €127,000, with the ICC having become increasingly aware that both women’s cricket, as revealed by the Guardian, and the under-17 and under-19 levels of are becoming areas of interest to match-fixers. The age group levels in particular are seen as a way of compromising young cricketers in order to exploit this further when their careers progress.

Since September, a revision to the ICC’s anti-corruption code has given investigators powers to request that players, coaches or administrators – at any level – hand over their mobile phones in order to access information. Reasonable grounds for doing so are required but refusal to do so can now result in a two-year ban.

Marshall, who began his role as the new code came into effect, has been in Adelaide this week for meetings with Australian federal police and other agencies to improve the lines of communication and the pooling of information. It is the latest in a series of such visits around the world.