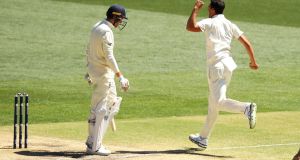 Any English dreams were shattered in the blink of an eye. Steve Smith was smiling again. There were no cricketing miracles here despite much feverish, English speculation in the bars of Adelaide late on Tuesday night. Australia won the second Test, which was a grand advert for Test cricket, by 120 runs. On the final day it was a gentle walk in the park for the Australians, the agonies of the fourth day suddenly a distant memory as they bowled England out for 233.

Two Tests up with three to play seldom loses in Ashes cricket. It happened as recently as 1937 but then the Australians, after a poor start, did have Don Bradman, Stan McCabe and Bill O’Reilly. And the tourists promised to pitch the ball up. So did Josh Hazlewood on Wednesday – to good effect.

Hazlewood bustled in from the Cathedral End and within 10 minutes of the start on an old-fashioned Adelaide day – a cloudless sky and the temperature rising – and both overnight batsmen were sent packing without adding to their score. Chris Woakes fell to the second ball he received; he was given out caught behind but reviewed with plenty of encouragement from his captain. Third umpire Marais Erasmus, who has been a busy man throughout this Test, took his time; he engaged with his old pals, HotSpot and Snicko, took note of Snicko, and Woakes – looking slightly bemused – was ultimately on his way.

In Hazlewood’s next over there was no need to summon Erasmus. This time Joe Root was on strike; the ball kept low and took the bottom of his bat yet it still carried to Tim Paine. Once Root saw that it had reached the keeper’s gloves, he set off for the dressing room and must have known then that England’s fate was sealed.

With a left-hander, Moeen Ali, now at the crease, Smith was quick to call upon Nathan Lyon and that straightforward move was soon rewarded. Lyon offered no easy runs so that Moeen eventually opted for the sweep shot, and the ball only made contact with his front pad. Up went Aleem Dar’s finger and yet again Erasmus had to desert his afternoon tea. Two reds and an orange meant that Moeen was out but England had the consolation, an infinitesimal one in the circumstances, of keeping their review under the new regulations.

There has been some debate about whether Moeen or Jonny Bairstow should bat at six in this England set-up. The case for Bairstow moving higher continues to gain weight for obvious tactical reasons triggered by Nathan Lyon. In this series Lyon has taken 10 wickets, nine of them have been left-handers and he has dismissed Moeen in every one of his four innings. So, the logic is that it is better for Bairstow, a right-hander and a good player of off-spin, to try to do a bit of damage to Lyon’s figures before Moeen comes in. Such a change would not be earth-shattering but it might help a little bit – and England need all the help they can get at the moment.

Craig Overton hung around with Bairstow until the advent of the second new ball. Mitchell Starc’s first delivery with the magenta meanderer was perfect, full in length and swinging back into the right-hander. Overton has been around long enough to recognise that he was plumb lbw. So Bairstow, who had looked in good touch, was stranded again, another reason to have him higher up the order.

Starc polished off Stuart Broad with another out-swinger – there is no point in bowling short at anybody with a new ball in your hand – and then Bairstow, seeking to improvise, was the last man to go and Starc’s fifth wicket of the innings.

So England head off to Perth, where they have not won since 1978, 2-0 down. Australia will follow them a few days later in buoyant mood. They have no worries about their bowling attack. All four have been near the top of their games and the excellence of that quartet may disguise the odd concern about one or two of their batsmen. Peter Handscomb might be the most relieved man if Australia opt for an unchanged team in Perth.

England have more concerns. Leaving aside the heavy historical precedents, they lack runs and an effective spinner and they could do with more pace in their attack on surfaces that offer little lateral movement. There are no obvious solutions to these problems. The solitary consolation, which was not always evident four years ago, is that they still seem to be busting a gut out there.