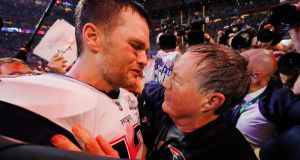 The New England Patriots famously picked Tom Brady in the sixth round of the 2000 draft after every other team in the NFL had passed up multiple chances to select the quarterback.

In a record-breaking 20-year partnership with head coach Bill Belichick the pair went on to win six Super Bowls together. Some have speculated whether Brady would have enjoyed the same success under a less talented coach than Belichick but during an appearance on Sirius XM’s Howard Stern Show, Brady vehemently denied those claims.

“I think it’s a pretty shitty argument actually that people would say that, because again, I can’t do his job, and he can’t do mine,” Brady told Stern on Wednesday. “So the fact you could say, ‘Would I be successful without him, the same level of success?’ I don’t believe I would have been. But I feel the same vice versa, as well.

“To have him allowed me to be the best I can be, so I’m grateful for that. I very much believe that he feels the same way about me, because we’ve expressed that to each other.”

Belichick is known for his ruthless streak, and has no hesitation in cutting players he believes are past their best. But Brady said he does not see his former coach as disloyal.

“I think he has a lot of loyalty. He and I have had a lot of conversations that nobody has ever been privy to, nor should they be, that so many wrong assumptions were made about our relationship or about how he felt about me,” said Brady.

“I know genuinely how he feels about me. Now I’m not going to respond to every rumour or assumption that’s made, other than what his responsibility as coach is to get the best player for the team – not only in the short-term but in the long-term as well.

“I got to the point where I was an older athlete and he’s starting to plan for the future, which is what his responsibility is. I don’t fault him for that. That’s what he should be doing. Not that I would ever coach, but if I was ever in a position of authority, I would understand that too.”

The Buccaneers last made the playoffs in the 2007 season but Brady said he was concentrating on the future rather than the past.

“I never cared about legacy. I could give a shit about that. I never once, when I was in high school, said, ‘Man, I can’t wait for what my football legacy looks like.’ That’s just not me. That’s just not my personality,” he said.

Brady said he did not make his final decision to leave the Patriots until mid-March, and cried when he informed Patriots owner Robert Kraft that he was leaving. “But I would say I probably knew before the start of last season that it was my last year,” Brady said. “I knew that our time was coming to an end.” – Guardian

Return of golf’s world rankings ‘a bit unfair’ - Joost Luiten 11:22
Rugby union looking at success of rugby league as a summer sport 10:21
Clubs play practice matches ahead of Premier League return 09:40
Conor McGregor announces his latest UFC retirement on Twitter 09:25
‘The same, but different’ - Irish racing ready for resumption 09:00
Here is your handy guide to sport on television this week