Five YouTube channels to get your fix of sporting nostalgia 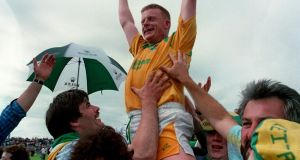 The Masters (Find the channel here)

This week should have been one of the best sporting weeks of the year as the first Major got underway at Augusta National with Tiger Woods defending. Alas, it’s not to be but at least we can hold out hope that it will take place on the newly scheduled dates in November. In the meantime The Masters channel on YouTube has the full final round broadcasts from every tournament since 1968. If you’re wondering where to start, the final round in 1979 is a good watch as Ed Sneed throws away a five-shot lead to lose to Fuzzy Zoeller.

Over the last few weeks World Rugby have been uploading the full broadcasts of lots of classic matches to their YouTube channel, starting with Tonga’s famous win over France in 2011. In a similar vein you can also re-watch the day a flamboyant Fiji side stunned Wales in 2007. So far there are no Ireland matches to choose from but the channel is being updated nearly every day and there is plenty of variety with memorable women’s matches and Sevens matches also included.

You can never go far wrong with classic World Cup matches and if that sounds like your thing then FifaTV has you sorted. Starting with Spain v Netherlands in 2014, Fifa have been uploading a new match each day from both the men’s and women’s World Cup. You could watch Brazil v France in 1986 and then fast forward 20 years to watch the same two sides meet in 2006 when Zinedine Zidane stole the show. You might be disappointed though if you’re looking for an Ireland match, we’re not sure the 0-0 draw with Egypt at Italia ’90 will quite make the cut.

Yesterday’s offering was the full 1976 All-Ireland senior football final between Dublin and Kerry, the day before it was Sligo and Tyrone in the 2002 qualifiers. It’s been a broad range from the GAA’s official YouTube channel so far and there’s almost something there for everyone at this stage with the famous Leitrim v Mayo 1994 Connacht final among them. The championship is due to start in a month’s time but with that looking increasingly unlikely this nostalgia may have to do for a while.

Each evening at 8pm you can settle down to a classic FA Cup match which began with Arsenal’s dramatic final win over Hull City in 2014. Tuesday night is one for Leeds fans as they got to relive Jermaine Beckford’s winner against Manchester United in 2010. The FA have endless archives to delve into so you can be sure there’s lots of good stuff coming. Set your reminders for 8pm.

1 Saudi Arabia-funded takeover of Newcastle United in serious doubt
2 Decision expected next week on staging of College Football game in August
3 Gerry Thornley: Home and away Six Nations could be its ruination
4 Coming fourth in the Olympics didn’t change this fearless quartet, time did
5 Net-tricks: How John McEnroe became the inner voice of a 15-year-old girl
Real news has value SUBSCRIBE