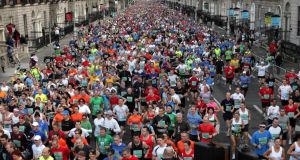 Spring forward, fall back, as my mother always says – not that anyone needs reminding now. I actually put my clocks forward last weekend, treating myself to some extra hours of spring daylight, and a sort of two-finger salute to a winter that just will not let go.

It’s still a good time to light the fire, cook some rice, read a book, and sip slowly on a case of Châteauneuf-du-Pape, although cabin fever is starting to set in, especially when you work mostly from home.

If Ken Ring, New Zealand’s celebrity weather forecaster, is right about one thing, it better not be this deep freeze lasting until May – although at least he is promising a scorcher of a summer.

Anyway, this weekend also marks the beginning of the so-called spring marathon season: between now and the end of April it’s a case of take your pick, not just from the ringleaders such as London, Boston and Rotterdam, but also Milan, Paris, Zurich, Vienna, Antwerp, Canberra, Daegu, Sao Paulo, and not forgetting the North Pole Marathon, the Right to Movement Palestine Marathon, the Saint Anthony Marathon, the Rotary Shakespeare Marathon, or indeed the Alexander The Great Marathon.

Most of these are, by the way, big businesses too. London, set for April 21st, is now the single biggest one-day event in the city, currently enjoying a five-year sponsorship deal with Virgin worth €20 million. The 117th Boston Marathon, on April 15th, gets similar financial backing from John Hancock, although there’s no accurate estimate of what these marathons actually generate in overall city revenue, or for their associated charities.

Our own blossoming marathon market, both spring and fall, now featuring the likes of Belfast, Cork, Longford, Dingle, Kildare, plus the Connemarathon, the Clare Burren marathon, the Causeway Coast marathon, the Walled City Derry Marathon Derry, the Waterford Viking Marathon, and not forgetting the Limerick Marathon, proudly sponsored by The Irish Times .

Dublin, however, will always be the big daddy of them all, the best organised, best attended, best value, and best for times too. Last year’s event attracted another record entry of 14,350 runners, and the 34th edition in October promises to be every bit as good.

The only pity, indeed mystery, is they’re still struggling to secure a headline sponsor that would make it that bit better again. Instead, they’ve had to reduce the prize money, cancel the elite field, and raise the entry fee by a modest €5.

Big city
A big city marathon like Dublin, with its healthy links, strong charity element, and tourist platform, particularly for the American market, seems like a shiny gift-wrapped present for any potential sponsor. What puzzles Jim Aughney, Dublin Marathon race director for the past 15 years, is that all their numbers stack up, last year’s marathon and countdown race series bringing in around 36,000 runners in total, and yet sponsors are falling away, rather than the other way round.

“We actually had a number of very good leads, only for things to fall down,” he says. “It was really these companies not having the marketing budget on top of the package, to actually promote their sponsorship. That seemed to be the only issue. I suppose the reality is we are still in very difficult economic times, especially when it comes to sponsorship, but it’s still a bit of a mystery why we’re finding it so hard to get sponsorship for such a positive event as this, and it’s not like we’re looking for a fortune either.”

The package Aughney refers to is the four-race countdown series (five-mile, 10km, 10-mile, and half-marathon during summer) the Dublin Marathon itself, plus the international breakfast run on the Sunday morning before, and a one-hour TV highlight production, all done for €200,000 – which sounds like a bargain.

Sporting bodies
Aughney’s cry for support comes in the same week as the chief executives of our three major sporting bodies – the IRFU, FAI, and the GAA – spoke before the Joint Committee on Transport and Communications, explaining how possible legislation to ban alcohol sponsorship in sport would hit their pockets, and dent the promotion of their headline events. The IRFU’s Philip Browne said there was no “white knight” waiting to fill the “financial chasm” that would be created should alcohol sponsorship be banned, and Aughney would certainly agree.

Despite the frowning on alcohol sponsorship, the latter is not averse to say, knocking at St James’s Gate.

“The funny thing,” he says, “is that if I got €1 each time someone asked us if we were providing Guinness at the water stations, especially the American entrants, then we wouldn’t need a sponsor.”

1 Every yellow jersey winner must still feel guilty by some association
2 Matt Williams: The sky is not falling in on Irish rugby - but Ireland do need a new plan
3 Weekend Club GAA previews: Kerry football and Kilkenny hurling deciders top bill
4 Kevin Babington: Learning to live again after life changed forever on Long Island
5 Superfan John Murphy keen to keep streak going and make it 80 not out in Donegal
Real news has value SUBSCRIBE

If soul-searching was a sport, today’s GAA teams would all be champions 06:00
Matt Williams: The sky is not falling in on Irish rugby - but Ireland do need a new plan 06:00
Superfan John Murphy keen to keep streak going and make it 80 not out in Donegal 06:00
Miss Amulet looking to complete rags-to-riches success at Newmarket 06:00
Every yellow jersey winner must still feel guilty by some association 06:00
Here is your handy guide to sport on television this week