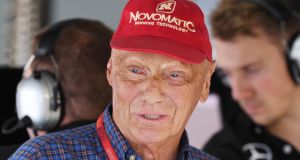 The former Formula One driver and three-time world champion Niki Lauda has died at the age of 70, his family has said. The Austrian died overnight on Monday, eight months after receiving a lung transplant.

“With deep sadness, we announce that our beloved Niki has peacefully passed away with his family on Monday,” the family said in a statement, according to the Austrian press agency. The statement paid tribute to “his unique achievements as an athlete and entrepreneur” and said “his tireless zest for action, his straightforwardness and his courage remain. A role model and a benchmark for all of us, he was a loving and caring husband, father and grandfather away from the public, and he will be missed.”

Lauda, who won titles in 1975, 1977 and 1984, was hugely admired, respected and liked within F1 after a remarkable career during which he won two titles for Ferrari and one for McLaren and came back from an horrific accident that left him severely burned and injured in 1976. He competed in 171 races and won 25. He also actively pursued business interests including his own airline and went on to have senior roles in F1 management, most recently as non-executive chairman at the hugely successful Mercedes since 2012, where he helped bring Lewis Hamilton to the team.

Laudamotion was fully acquired by Ryanair last year. The airline’s chief executive, Michael O’Leary, said: “Niki Lauda will remain in our heart and our memory as a visionary leader, a legend of Formula 1 and an aviation pioneer.

“Niki was an exceptional entrepreneur whose courage and fighting spirit inspired millions. While we are devastated at his untimely passing, his spirit and vision will live on in Laudamotion, which proudly carries his name and his entrepreneurial spirit. It’s a sad day for Formula 1 and Laudamotion.”

As tributes began to flow, his former team McLaren said: “Niki will forever be in our hearts and enshrined in our history.” Jenson Button, the former world champion, said “a legend has left us” while prominent motorsports journalist Nick De Groot said Lauda’s status within the sport was “not just for what he achieved on the race track, but for what he overcame to get there”.

Lauda was an exceptional driver, brave and uncompromising but with fine judgement. He was born in 1949 and pursued a career in racing against the wishes of his family. A determination he would demonstrate again when he took out a personal bank loans to ensure he had a shot at F1. He made his debut in 1971 and seasons with March and BRM followed where he impressed enough for Enzo Ferrari to offer him a drive with the Scuderia in 1974. Ferrari were rewarded with a podium on his first race and a win three meetings later in Spain. The next year he took his first title for the team, their first for over a decade.

A year later, when in another strong position for the title, he had a major crash at the German Grand Prix at the Nürburgring. Trapped in his burning car, he was pulled from the wreckage but suffered severe burns and damage to his lungs. Despite doubts he would survive or indeed ever race again, Lauda’s determination to do so was extraordinary and just six weeks later he returned for the Italian Grand Prix, still bandaged and in pain after extensive surgery. With James Hunt resurgent Lauda could still have taken the title at the final round in Japan but opted to retire from the race convinced the torrential rain made it unsafe. Hunt, with whom he enjoyed both respect and friendship, took the championship.

Lauda went on to take the title a second time a year later but after two further seasons with Brabham retired in 1979, when he started his first airline business. He made a comeback for McLaren however in 1982 and went on to win the championship for them in 1984 after a hugely competitive fight with team-mate Alain Prost. The Austrian took the title at the last round by just half a point. He retired from F1 for a second and final time in 1985 and returned to pursuing his business interests.

He took a consulting managerial role at Ferrari in 1993 and was team principal of Jaguar between 2001 and 2002. He has been a fixture in the paddock since joining Mercedes however, always outspoken, entertaining and informed. He was as vital a component in F1 in the latter part of his life as he had been during his driving heyday. – Guardian