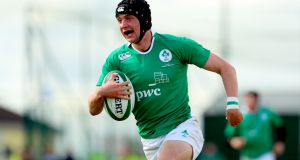 One of Ulster rugby’s most exiting gains of recent years may ultimately prove a major loss to Irish athletics, but Aaron Sexton is still tearing up the record books on the track before committing full time to the oval ball.

Already the fastest schoolboy in Irish athletics history, Sexton once again improved his 100 metres best to 10.49 seconds when winning a sprint double at the Ulster Schools Championships at the Antrim Forum over the weekend - moving him to joint 14th on the all-time list of Ireland’s fastest men.

At age 18, soon to begin his A-level exams at Bangor Grammar School, Sexton has to chance to go faster again when he runs at next month’s Irish Schools Championships in Tullamore, where last year he improved the senior boys’ record to 10.52 seconds when winning the 100m.

Sexton’s 10.49 now improves his own Ulster Schools record, and he then completed the double when winning the 200m in 21.20, just shy of his Northern Ireland junior record of 21.06, set last summer. He won the 100m by over half a second, and the 200m by almost two seconds.

Aaron Sexton wins Gold in the Senior Boys 100m with a New Ulster Record of 10.49 seconds

Already a member of the Ulster Academy, while continuing his studies at Bangor, Sexton got his first game time for the province as a replacement against Gloucester in a pre-season friendly last August, still aged 17. Earlier this month, Sexton was named Ulster A Player of the Year, on the back of his performances in the British and Irish Cup, where he scored seven tries.

At 6ft4in, and weighing some 90kg, Sexton’s exceptional natural speed and strength - and indeed speed potential - was further captured last October when, in picking up two tries against Connacht A, he accelerated to 37.8 km/hr - which according to Ulster Rugby was the fastest player speed ever recorded by an Ulster player in a match, at least since they started measuring such statistics in 2012/13.

It may only be a matter of time before Sexton slots in somewhere beside Jacob Stockdale and Craig Gilroy, and in the meantime leaves Irish athletics wondering what might have been, or indeed might he ever return to the sport?

He first emerged when winning the gold medal over 200m at the Junior Commonwealth Games in the summer of 2017; his 10.52 in Tullamore at last year’s Irish Schools Championships, actually the same time as second-placed David McDonald from Wexford CBS, saw him dip under the existing record of 10.59, set five years previous by Carlow student Marcus Lawlor.

Sexton then completed a sprint double by winning the 200m in another best of 21.12, and he improved that again to 20.06 seconds to qualify for the 200m semi-final at the World Under-20 Championships in Tampere, Finland, last July.

Sexton has also played on the Irish Under-18 Schools team, and was also part of the winning European Under-18 Sevens Championship squad back in September, 2017. Tullamore next month may well mark his last track race for a while, but there will be considerable interest in what sort of 100m record he might leave behind.

France expected to receive elite athlete’s exemption to travel to Dublin 14:10
Once pain of defeat eases Frampton will be glad it is all over 14:03
Leinster submit detailed plans to Government for safe return of spectators 13:15
‘I shredded everyone’s nerves, I’ll try to win more emphatically next time’ 11:08
Nick McCarthy to re-join Leinster from Munster 10:38