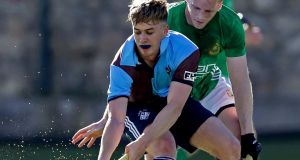 Shane O’Brien was Three Rock Rovers’ Neville Cup final hero for the second successive St Stephen’s Day as they held on to their title with victory over Corinthian.

A year ago, the goalkeeper made the saves to see off Pembroke in a shoot-out; this time he kept the Reds at bay after normal time had ended 1-1.

It made it six trophies in a remarkable 2018 for the Rathfarnham club on a formative day as Rovers fielded seven teenagers, showing their strength in depth as they adjusted their deck due to new rule restrictions in this competition.

Conor Empey had given them a 1-0 half-time lead when he cleaned up from a penalty corner rebound but the Reds fought back in the second half.

Dan Treacy levelled with 10 minutes to go from a melee in the circle, ultimately sending the game to a shoot-out.

In Munster, Bandon won their first ever Peard Cup title in dramatic style as they came from 2-0 down in the closing 10 minutes to tie with Cork Harlequins before winning their shoot-out 3-2.

Quins looked set to end their decade-long wait for the title when Julian Dale roofed a first-half drag-flick. He then cleaned up a rebound off his own turnover and break for 2-0 deep into the second half.

Conor Robinson’s twin saves from Dale kept Bandon just about in the tie and the west Cork side got back into the game via Clinton Sweetnam’s low piledriver to give them hope.

And they snatched an equaliser when Eoin Nyhan capitalised on some confusion in the Quins’ D to push home in the last two minutes, setting the scene for their shoot-out success.