The right way? The wrong way? The American way - USA kids play on in pandemic

America at Large: sport and schooling continues with different levels of restrictions 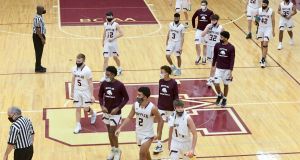 Last Saturday morning, I walked my 10-year-old son Finn into the basketball gym attached to Our Savior Lutheran church. He sanitised his hands before elbow-bumping Kelly, the coaching preacher, and then double-checked his mask was in place. Where it dutifully stayed for the next two hours.

Parents wishing to watch the kids do drills and scrimmage were welcome to take a seat in the bleachers. A very simple pleasure currently denied everybody in Ireland, so what used to be a quotidian part of the weekend ritual is now the journalistic equivalent of Instagram travel bragging.

Four hours later, I pulled into the local university. Same drill, slightly different protocols. An online form updating my 14-year-old’s health status was required before he was cleared for indoor soccer training and I wasn’t allowed to accompany him from the car into the facility.

But, once his feet reached the astro turf, he and his pals were told they could whisk off their masks and breathe easy for the duration. Two venues a couple of miles apart. Two separate sports. Both involving huge numbers of kids playing the games they love. Under straitened circumstances. In the middle of a pandemic. Imagine.

This is not one of those “the virus is not real, the danger is exaggerated” polemics, it’s merely a dispatch from a faraway front in the same war, a glimpse of how it’s being handled differently in the USA. From March last year, Long Island locked down and children’s sport was immediately put on ice. All leagues, all school competitions, all codes. Summer camps were cancelled too. Then, early in August, club soccer restarted with some modifications such as ball-spraying and mandatory mask-wearing on the bench. From that day to now, it’s been, in a lot of ways, business as usual.

We live in Suffolk County which has a population of 1.4m, 155,000 confirmed cases, and at the time of writing, 2,968 deaths. Horrific numbers. Yet, since last September, my boys’ schools have opened for in-person class every single scheduled day. They wear masks. There’s lots of plexiglass barriers and plenty of restrictions governing their every move. Aside from the fact I have to declare them symptom-free on the website each morning and all extra-curriculars have been stopped, it’s really not a whole lot different from how things used to be.

And it’s been kind of the same for club sport in these parts. When they first went back playing last summer, there were difficult decisions to be made. Is it safe? Is this the responsible thing to do? What is the risk/reward? After so many months without school or matches, I came to the conclusion their mental, as much as their physical, health needed the outlet that playing with their friends provides. Not saying it was the right or wrong thing to do, just that it made sense at the time.

Of course, I worried when it became apparent the approach to enforcing regulations was going to be somewhat haphazard. At several outdoor games, I witnessed groups of parents huddling together, openly disregarding the six feet of social distance and often taking off their masks too because, as they bellowed if you brought this up, “we’re outside”.

A few of those sideline mothers and fathers were probably jonesing because high-risk high school sports such as soccer and grid-iron (regarded here with the same avidity south Dubliners reserve for the Leinster Senior Cup) were prohibited by the local government until this month. In one of many inexplicable anomalies about this situation, boys and girls couldn’t play for their schools’ teams last autumn but were using the same institutions’ fields to represent their clubs each weekend.

That prompted lawsuits from families concerned that in their final season before graduating their Johnny or Jane was being deprived of the opportunity to impress college recruiters and to win an athletic scholarship. Anger in this regard was compounded by the fact that private (mostly religious) schools were not bound by the same rules and could field teams. A strange tableau. The fee-paying institution was holding sporting events while the publicly-funded one up the road risked government censure if it did so. America’s version of an Irish solution to an Irish problem.

Maybe allowing my boys to play for clubs through all this is one more instance of me going native. Or perhaps I’m just being pragmatic in an environment riddled with so many inconsistencies. I’ve been criticised for allowing them to tog out by people who put their children on school buses twice a day, where they are masked up but definitely not six feet away from their fellow travellers. I know that because my lads are on those buses too.

For all that I don’t quite grasp about a situation rife with so many contradictions, the sporting stuff has so far worked out okay. The only exposure my school-going children had to the virus came when a classmate of my youngest tested positive. Everybody in that room with him was sent home, quarantined and housebound for 14 days. When the state-appointed tracer called to talk me through the restrictions, I asked about my other boy.

“Can he continue to go to school?:

“Can he continue to play soccer at weekends?”

“Does that make sense to you?”

The right way, the wrong way, and our way. The story of the pandemic.