Leon Spinks, the Wild Bull who did not know the meaning of quit 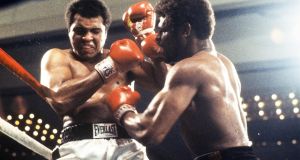 When Leon Spinks was away fighting in the Pan American Games in Mexico City, he and his then wife Nova had a couple of heated arguments on the phone. Upon returning home with a silver medal, he brought her a peace offering, handing her a mysterious object wrapped in old newspapers. Nova unfurled an enormous block of weed and smiled, knowing a man can have no greater love than to shepherd such contraband through customs and onto an international flight.

Twelve months later, one week after winning light-heavyweight gold at the Montreal Olympics, Private Spinks still had not returned to the scheduled embrace of the US Marines. Trying to pre-empt accusations of him going Awol, his commanding officer kept rewriting leave permits for the missing champion, presumed partying somewhere on the road between his native St Louis and his military duties in North Carolina.

Finally, sentries at the front gate called to say a soldier had just crashed into the perimeter fence and taken out the base’s welcome sign. The Wild Bull of Camp Lejeune had returned.

That was just one of the nicknames. Neon Leon was another. The accidental champion. The greatest street fighter of them all, according to George Foreman. He lived up to every advance billing and, unfortunately, the gloomy predictions his meteoric rise would be followed by a precipitous fall.

His death at the age of 67 last week, however, spawned a welcome revisiting of that magical Vegas night in 1978 when he became the first boxer to wrest the heavyweight title from Muhammad Ali inside the ring, and hired Mr T as his bodyguard on $1,000 a day. Some footnote in history.

Just his eighth professional outing, the defining moment of a sporting life tinged, as too many boxers’ seem to be, with fleeting fame, impressive profligacy, endless legal skirmishing and inevitable tragedy (one son was murdered in East St Louis).

Within weeks of defeating Ali, the WBC stripped him of the title for refusing to fight Ken Norton, he was being sued by various debtors, and had been arrested for driving without a license the wrong way down a street in his hometown. There was a cocaine possession charge too and the thorny issue of a Spinks’ lookalike running up bills and courting women in his name. Not the beginning or end of his problems with the law.

Leaving a bar in Detroit one night, he was hit from behind with an iron bar and woke up naked in a hotel room, his assailants having stolen his fur coat and his false teeth. Disguising the most famous gap-toothed grin in sport, those dentures were recurring casualties of his debauchery, often pilfered by jilted lovers wanting to put manners on him.

And, remember, this was a man so determined to party he once rappelled down from an upstairs hotel room window using bed sheets tied together to avoid the vigilant trainer standing sentry outside his door.

The most lovable of rogues to those who knew him well, always came across as happy with his meagre lot

“I was out boogeying 24 hours a night, sleep all day, party all night,” said Spinks. “Doin’ all kinda things. Havin’ four or five women in a room, all mine! I had the power to do that. But the women gave me the power to do that. And then I come in and say, ‘Eenie, meanie, minie, moe . . . okay, your turn tonight!” And that was that. I enjoyed that. I sure did. I ain’t gonna lie.”

Spinks grew up hard in Pruitt-Igoe, a high-rise housing project that came to symbolise the folly of post-war urban planning. A high-school drop-out, he honed his fistic skills in the Marines and, in Montreal, was part of the USA’s finest-ever Olympic boxing team, winning gold alongside his more sensible younger brother Michael, Sugar Ray Leonard, Leo Randolph, and Howard Davis. He was the only one to reek of alcohol when the masseuse rubbed him down on the morning of his final victory over the fancied Cuban Sixto Soria.

A naif prone to exploitation by knaves masquerading as trainers, managers and advisers in the professional ranks, he was easy pickings for hangers-on too. For the rematch with Ali at the New Orleans Super Dome, he departed his hotel with an entourage of 70, returning the same night as the lone passenger in his stretch limousine. Most of the $3.5m he got for that defeat was purloined by a crooked lawyer and by the time he fought his last in 1995 as a 42 year-old, his purse was $2,000.

While his son Corey became a multiple world champion at different weights, Spinks found work through the years as a janitor, a bouncer, a bartender and, even at McDonald’s. Now and again, a newspaper would get wind of his lowly employment status and reheat the staple “harder they fall” feature. The problem with this narrative was that Spinks, the most lovable of rogues to those who knew him well, always came across as happy with his meagre lot and grateful for the good days and epic nights he had.

Struggling with dementia in recent times, he was diagnosed with prostate cancer and when it spread to his bones in November, 2019, doctors gave him two weeks to live. Lovingly cared for by his third wife Brenda, he somehow hung in there for 15 months because, as his old trainer, Kenny Loehr used to say, “He didn’t know the meaning of the word quit.” He was, after all, the Wild Bull.

5 Grand National hero Rachael Blackmore on the mark at Fairyhouse