Rafael Nadal in the groove as he brushes past Fabio Fognini 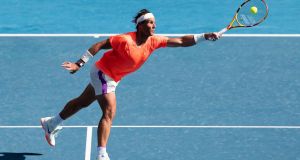 Rafael Nadal is through to the quarter-finals in Melbourne. Photograph: Mackenzie Sweetnam/Getty

One week into the Australian Open, Rafael Nadal has experienced as many injury-related emotions as some tennis players do in an entire season. He has been through the frustration of arriving at the first grand slam tournament of the year injured and the tension of focusing so many of his on-court thoughts on not inflicting more damage as he waited for his prognosis to improve.

Finally, as he beat Fabio Fognini 6-3, 6-4, 6-2 on Monday to reach the quarter-finals, his focus shifted to the hope that he may well improve enough to truly compete in the week ahead.

“The preparation probably had been worse this year than the year before because I had that problem on the back for the last 19, 20 days,” Nadal said. “But I found a way to be what I am today and the feelings are right there without a doubt. So yeah, I make a step forward today, something that I needed, and I need to make another one for Wednesday against [STEFANOS]Tsitsipas.”

Fognini has, at certain points in Nadal’s career, been a true thorn in his side. The Italian has beaten him four times and he is one of the few players unmoved by the aura of the big three, which can sometimes produce comical results: he once spent a chunk of their 2015 match in Hamburg ceaselessly bickering with Nadal.

There is ample confidence for Nadal to take from handling such a talented player in straight sets. It was not perfect: after a strong first set, Nadal was 2-4 down in the second set and his recovery was helped by a series of poor games from Fognini, including four errors as the second set hung in the balance at 4-4 30-0 on Fognini’s serve.

But there are good signs. Since the beginning of the tournament, despite the initial cloud of negativity, Nadal has been playing positive tennis. He is returning serves from far closer to the baseline and he seems determined to play efficiently and to control points from the beginning. Asked earlier in the tournament why he was flattening out his backhand more than usual, he said his lack of time to fully prepare for Melbourne means he is relying on his instincts more than usual. His instincts have so far been to attack.

“Things are not mathematics in sport,” said Nadal, asked how close he is to his top level. “Difficult to find – to have a clear answer on. I mean, things in sports change quick. Sometimes you feel that you are ‘so so’, then you win a couple of matches and then you feel the best possible [WAY]– something that happens plenty of times.”

Nadal will be looking for things to snap into place against Stefanos Tsitsipas next, who received a walkover against Matteo Berrettini because of an abdominal injury. As the top two seeds, Novak Djokovic and Nadal, continue to deal with injury issues, further focus will be on Daniil Medvedev and Andrey Rublev, who along with the qualifier Aslan Karatsev marked the first time in history that three Russians have simultaneously reached the quarter-final stage of a grand slam tournament.

The two Russians are old friends who have known each other since they were children, battled each other across juniors and will now face each other for a spot in the semi-finals. Their quarter-final match-up will place their styles together as Medvedev’s tactical, flexible, unique defence-based style meets Rublev’s relentless attack. Defence has so far won out, with Medvedev leading the head-to-head 3-0.

“I don’t know about other tennis players but for me it would seem like 95% of the guys it’s part of our job,” Medvedev said. We’re going to play each other maybe 10 more times in our careers, 15. For sure, I mean, almost 100 per cent it’s not going to be 15-0 for somebody.

“We can talk just before the match. Of course during the match we’re going to try to win, fight for our best. You never know. Sometimes you can maybe even not fight on the court but, like, argue on the court or something because we’re competitors. After the match we are great friends. There is no rivalry in this part of competition.”

Britain’s Joe Salisbury and Jamie Murray both reached the men’s doubles quarter-finals, with the defending champions Salisbury and Rajev Ram of the US beating John Peers and Michael Venus 7-6(4), 7-6(4). Murray, in his first grand slam tournament since uniting with Bruno Soares of Brazil, defeated Simone Bolelli and Maximo Gonzalez 6-7(5), 6-2, 6-4. Both teams stand one win away from facing each other in the semi-final. - Guardian