To what extent was Smith forced to manage Warner instead of being able to rely on him?

"Devastated" former Australia cricket captain Steve Smith broke down in tears repeatedly as he apologised for his part in the ball-tampering scandal which has rocked his nation. Video: Reuters 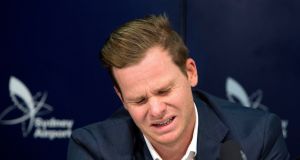 Take a look through Steve Smith’s Instagram. There, you’ll find a series of quite beautiful pictures taken from high in the sky above beaches and cities and empty cricket grounds. Smith loves his drone and the photos it allows him to capture from all sorts of places. He’s proud of the shots and enjoys talking about the fun he has with it.

The joy is youthful and boyish, exactly as Smith is with his game. The cute and slightly daft story of his fiancee Dani helping him train by feeding the bowling machine for his net practice when they were dating was folklore long before he was the best going around.

When asked after his stunningly patient Ashes century at Brisbane in November how he maintains concentration, he said it is because he just wants to bat. He loves a leave as much as a score. By stark contrast to David Warner, he’s entirely straightforward.

But Smith’s simplicity has also driven the terrible mess he’s now in. With the game meaning so much to him, broader reference points in life are harder to locate. He was whipped out of high school by his manager aged 17, his school principal told that Smith could earn a million dollars a year. To do so, he had to live little but the game, and he has ever since.

Of course, this is the ultimate good problem to have – Smith is young, extremely wealthy, and until now, successful. But captaincy is more than runs; it’s being able to make good decisions across a whole variety of situations. On Saturday in Cape Town, he was exposed in the most critical moment. “It was a failure of leadership,” he admitted at his Sydney airport press conference. “Of my leadership.” He’s right.

Remember, Smith was made skipper because he was the best player in the team – so often the case in this sport. He was young, and for all the success, hadn’t long been a permanent member of the XI. That Warner, the second most accomplished player in the team at that stage, was reflexively made his deputy spoke of a dressing room lacking in experience.

In that, he was let down. As Gideon Haigh observed during the week, part of the vice-captain’s remit is to provide counsel to the captain if they are losing their way, not to initiate the harebrained schemes to begin with. To what extent was Smith forced to manage Warner instead of being able to rely on him? It’s a question that will haunt him over the next year.

What’s clear is that he was let down by his deputy and also by others around him after play on Saturday at Newlands when deciding to further an elaborate lie to cover up the initial mess that he in essence condoned by failing to intervene.

Further, Smith commented pre-Test that he was exhausted, echoing similar remarks before the recent one-day series against England where he said he hadn’t felt like batting. This is a player who has also admitted he barely sleeps during Test matches. Living and breathing something can make it toxic, and someone should have twigged that an out-of-sorts captain could make a blunder. Hindsight, sure. But that’s what support staff are for.

When Mitchell Marsh was talked up as a future captain by Simon Katich at Durban, people joked that he would never get the chance – Smith, at 28, would lead forever. But in its infancy his era is over. For now, at least. It was instructive that when James Sutherland handed him his sanction, including 100 hours of service to community cricket at local level, Smith smiled back at the Cricket Australia boss and said that’s what he would be doing anyway. He’ll be back as soon as possible.

Let’s hope before that, he takes the gap year he never had. Grab that drone and go. Revel in the anonymity of Europe or South America and learn from people who have no idea who he is. Take the Jobe Watson route and make coffees in Brooklyn. Whatever it is, it would be a wonderful benefit of this awful mess if he comes out the other end a considerably enriched human. Then? Who knows. Maybe a great leader will be made of him yet.