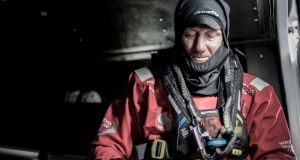 John Fisher about to head out on deck of Scallywag during leg seven of the Volvo Ocean Race from Auckland to Itajai, Brazil, on March 24th

With the remaining six boats competing in the Volvo Ocean Race safely past the notorious Cape Horn, the seventh boat that crew member John Fisher was lost overboard from on Monday is still at sea and progressing to port in Chile.

The team on Scallywag are expected to make landfall early next week or over the weekend. An in-depth report into the tragedy will likely follow once skipper David Witt and his crew have had time to recover and come to terms with their grief.

But against a backdrop of considerable online speculation, rumour and judgement, the Hong Kong team has released some initial details that include:

Weather conditions were 35-45 knots – gale force – with four to five metre seas and showers reducing visibility. It was 15 minutes before sunrise;

At approximately 1300 UTC on Monday the 65ft boat surfed down a large wave leading to an accidental crash gybe;

Fisher was on deck in the cockpit, and as he was moving forward to tidy up the sail control lines he had unclipped his tether;

As the mainsail swung across the boat in the gybe, the mainsheet system caught Fisher and knocked him off the boat. The crew on board believe he was unconscious from the blow before he hit the water;

He was wearing a survival suit with a wetsuit hood and gloves and a lifejacket;

Man-overboard buoys were thrown off the back of the boat to mark the position;

It took some time to get the boat under control and motor sail back to a position near where the man overboard occurred;

A search and rescue operation was carried out for several hours but there was no sign of Fisher or even the man-overboard buoys;

With weather conditions deteriorating, a difficult decision was taken to abandon the search and preserve the safety of the remaining crew.

Other questions remain outstanding but previous incident race reports have been highly detailed and useful learning tools, although these will be of little comfort to Fisher’s bereaved family.

While there has never been any doubt around the dangers involved with loss of life an acknowledged risk, this is the first death of a competitor since Hans Horrevoets was lost off ABN AMRO 2 in 2006 in the North Atlantic approaching Portsmouth.

In all seven crew members have died either in the Volvo Ocean Race or its predecessor, the Whitbread Round the World Race. Additionally, a Chinese fisherman died earlier this year following a collision at night with a race competitor.

Meanwhile, the political instability in Catalonia, Spain, has resulted in the postponement of the Barcelona World Race that had been scheduled to begin next January in IMOCA 60-footers.

Previously won by Ireland’s Damian Foxall racing with French sailor Jean-Pierre Dick, the latest edition of this double-handed round-the-world race was due to include a pit stop in Sydney.

The race was on the cards for Crosshaven’s Nin O’Leary, who had hoped he might be able to compete as part of his training plans to enter the next Vendee Globe single-handed non-stop round-the-world race in 2020.

“It’s a pity, but we kinda knew it was coming,” he told The Irish Times. “It would have been good to go around [the world] with another person ahead of the Vendee but c’est la vie.”

This weekend marks the completion of Enda O’Coineen’s circumnavigation that was interrupted during the last Vendee Globe race when he was dismasted off New Zealand.

As the Vendee race does not permit stops or outside assistance, he was obliged to abandon the race but after reaching a deal with another team’s boat, his rebranded “Le Souffle du Nord Kilcullen Team Ireland” departed New Zealand at the end of January, almost a year after his original abandonment, and he continued his solo voyage.

The Galway man is expected to reach Les Sables D’Olonne in western France, the start and finish of the race named after the Vendee region where a mayoral reception is planned.

In other positive news for Irish short-handed sailing, Meath sailor Tom Dolan has secured Smurfit Kappa as his sponsor for the Figaro single-handed circuit this summer following his sixth place out of 56 entries in last year’s mini-transatlantic race.

The sponsorship raises the prospect of two Irish boats in the famous Solitaire race in August alongside Joan Mulloy, who recently announced BIM as her sponsor to become the first Irish woman to compete in this series.

1 Gordon D'Arcy: I know what Joe and Cheika would do. Fix the basics
2 Darragh Ó Sé: Cork and Donegal went out with the wrong attitude
3 Simon Easterby admits Ireland may need to take new line on maul
4 Fernandes on the double as Manchester United get their revenge
5 Sean Moran: Bloody Sunday centenary weekend will live long in the sporting memory
Real news has value SUBSCRIBE

Fernandes the spark for Man United; Gordon D’Arcy says get the basics right 07:36
Envoi Allen the star attraction at Fairyhouse 07:45
Gordon D'Arcy: I know what Joe and Cheika would do. Fix the basics 06:00
Sean Moran: Bloody Sunday centenary weekend will live long in the sporting memory 06:00
Connacht hopeful Papali’i’s red card against Zebre may be rescinded 06:00