‘I understand that we’re going to have some struggles, nobody said it was going to be easy’ 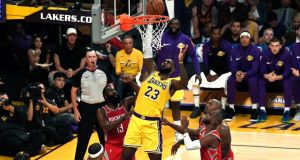 Los Angeles Lakers’ new forward LeBron James said he was not disappointed with the defeats in the first two games and the early struggles were normal for a side that overhauled their roster in the offseason to bring in the league’s best player.

The Lakers fell 124-115 to the visiting Houston Rockets to spoil James’ debut at Staples Center after dropping their season opener to the Trail Blazers in Portland on Thursday.

“I’m not disappointed at all,” the three-time NBA champion, who signed a four-year, $154 million deal with the Lakers in July, told reporters.

“I understand that we’re going to have some struggles, some early struggles. And nobody said it was going to be easy.

“We had some miscues down the stretch. We had some missed shots. But that’s how the cookie crumbles sometimes. But I’m not disappointed at all.”

The game will be best remembered for a fist fight that broke out in the fourth quarter that led to the ejections of Lakers’ Brandon Ingram and Rajon Rondo and Chris Paul of the Rockets.

James, who stepped in to help break up the melee, said he did not see what caused the brawl, which the Rockets said started when Rondo spit in Paul’s face.

The NBA is expected to announce sanctions on Sunday.

“I didn’t see anything and I didn’t say anything to my team after the game,” James said. “I just tried to calm things down, that’s all. Play basketball.”

James said his focus was on the game against the San Antonio Spurs on Monday.

“We had our chances tonight. I think we take this opportunity tonight to go over the things we could have done better and be frustrated,” he said.

“But when you wake up tomorrow it’s a new day and a new opportunity. You leave things in the past and you get on with the future.”