Sam Bennett a true product of Irish cycling, maybe not a reflection of it 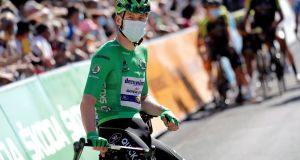 Ireland’s Sam Bennett, wearing the sprinters green jersey, waits for the start of the stage 13 of the Tour de France.

If like me you’ve spent some time this week learning how to pronounce Tadej Pogacar you may also have been delving into the history of Slovenian cycling. Turns out there isn’t much, at least not since breaking away from the former Yugoslavia back in 1991.

Besides some outliers along the way - Andrej Hauptman third in the 2001 World Championships, Simon Spilak winning 2010 Tour de Romandie - it was last Sunday when Slovenia, a country of just under two million people, further announced itself as a sort of new superpower of cycling.

First into the Stage 9 finish at Laruns, the 21-old Pogacar (pronounced Po-GA-char) became the youngest winner of a stage in the Tour de France since 1993, when a young American named Lance Armstrong won Stage 8 into Verdun. Finishing a close second was Primoz Roglic, thus becoming the first Slovenian to wear the yellow jersey.

By Friday’s stage 13 summit finish at Puy Mary Cantal, Roglic and Pogacar had taken further control, and now sit first and second overall; Roglic 44 seconds ahead of his compatriot, with defending champion Egan Bernam now 59 seconds back. It’s hard to see any rider halting this Slovenian train before Paris.

Cycling history does have a tradition of producing pockets of success such as this, same as Ireland produced Seán Kelly and Stephen Roche in the 1980s, or the way Carrick-on-Suir produced Kelly and then Sam Bennett, who in this year’s Tour had already bridged that 31-year gap since Kelly last won the green jersey before winning a first Tour stage of his own.

Pogacar and Roglic may be the latest in cycling’s historical line of such coincidence (nothing less, nothing more?) but what is certain is Slovenian can claim them as their own, both riders a product of their own system, whatever exactly that is. Roglic did begin his sporting life as an international ski jumper, winning two Continental Cups, before turning to cycling at age 22, believing it must be easier that ski jumping.

His first success came with Slovenian team Adria Mobil, while Pogacar’s talents were first noticed by Hauptman, then Slovenian national coach, his big breakthrough already coming for a while, after he won three stages in last year’s Vuelta a España.

Bradley Wiggins wouldn’t have had much of a comeback had he tried to claim Pogacar and Roglic as “British”, even if they both speak relatively good English, and whether he was being mischievous or not, Wiggins picked the wrong rider too in Sam Bennett during that now comical midweek sketch with Kelly on Eurosport’s The Breakaway.

When the family returned to Carrick-on-Suir when he was four, Bennett briefly toyed with the game himself, before discovering another sport through a local mountain bike league. Once transferred to the roads success came quick: in 2008, aged 17, he was Irish Junior road race champion, and a year later became the youngest ever rider to win a stage in the famed Rás Tailteann.

He joined French amateur team Vélo-Club La Pomme Marseille, where after several seasons of hard knocks, and more than once coming close to quitting the sport, he rode with his first pro team in 2013 with the Seán Kelly An Post-Chain Reaction.

Towards the end of that season, resigned to returning to college if things didn’t improve, and still encouraged by the likes of Kelly and his first coach at the Carrick Wheelers cycling club, Martin O’Loughlin, Bennett won the fifth stage of that year’s Tour of Britain, finishing in Caerphilly, marking perhaps the last turning point in his decision not to turn back.

From there Bennett joined NetApp-Endura, later Bora-Hansgrohe, and after three stage wins in the 2018 Giro, two more in the 2019 Vuelta, he joined his own self-proclaimed dream team in Belgian outfit Deceuninck-QuickStep. But he could never have made it this far without that early input of the so-called Irish cycling system.

First cousins Nicolas Roche and Dan Martin, born in Conflans-Sainte-Honorine and Birmingham respectively, now aged 36 and 34, have been proud servants to Irish cycling throughout their senior careers, particularly on the Olympic and World stage, and would also be first to admit that they aren’t products of the Irish cycling system.

Eddie Dunbar unquestionably is, and still only 24 very much the future of Irish riders in the peloton too: only nothing is certain, Dunbar breaking a collarbone this week riding for Team Ineos in the Tirreno-Adriatico, while other promising riders such as Rory Townsend and Ben Healy came through the British underage ranks.

Cycling Ireland can point to the increase in recreational riders and the popularity of their Zwift League, helped in part by the pandemic, only Bennett’s success in this year’s Tour comes against the backdrop of the cancellation of the 2019 Rás Tailteann for the first time since 1953, the organisers unable to secure a headline sponsor, two years after An Post-Chain Reaction was also disbanded over lack of funds, the team that had nurtured other young riders such Ryan Mullen, Conor Dunne and Matt Brammeier.

The Rás na mBan can’t secure a headline sponsor either, and Aqua Blue Sport, Rick Delaney’s ambitious move to establish an Irish team in the professional ranks, ended in liquidation in 2017. The moderate success of Irish track cyclists has also come at a time when the national velodrome is still sitting on an empty site at Abbotstown with €16 million in allocated funding, still left with no stone turned, further evidence perhaps that Bennett’s success may not be a true reflection of Irish cycling, but a mask over some of the enduring problems behind it.