Taylor's shattered invincibility may be blessing in disguise 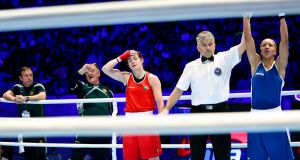 Katie Taylor loses a split decision against France’s Estelle Mossely in the World Championship semi-final in Astana. The fight was so close that on another day it could have ended up as a unanimous decision for the Bray fighter. Photograph: Inpho

The scoring was everything. Katie Taylor was maybe one or two per cent off her game and she allowed her fight against Estelle Mossely to come down to a matter of opinion.

In past years when the Olympic champion went into tournaments she did so with the express design to win her bout by margins large enough to ensure that the decision, as far as possible, was removed from the judges. When they begin to decide margins, that’s when decisions are in the lap of the gods.

Split decisions are common in the sport and a few fights before Taylor’s defeat, howls of booing greeted another outcome as French fighter Sarah Ourahmoune walked away shaking her head in disgust as Thailand’s Peamwilai Laopeam was handed the match. Taylor was not the only stunned athlete in Kazakhstan.

She was judged by one person to have won all four rounds and to have drawn the bout by two others. When the two who scored it a draw were asked to nominate a winner, they chose Mossely.

The outlier was the judge who scored it 40-36 in Taylor’s favour. Asking that the three judges contribute and not going with 1-0 is a boxing safety mechanism to try to get the right result. This time it went against the Irish champion.

On another day it might have ended up as a unanimous decision for Taylor if the two who judged it level had given her the preference. That was how close it was.

Why Taylor left it so tight and whether she can successfully defend her gold medal has now become a greater fascination than when she was winning her fifth world title in South Korea. An injection of drama and conflict – where before there was none – has shifted perceptions.

Instead of going to Rio as invincible, she’s perceived as having fallen to a mortal level; she is vulnerable and now within reach. Those concepts are unfamiliar to Taylor.

But the reality is that she was on an upward sweep and was boxing better in Astana than in Turkey when she lost to Yana Alekseevna and missed Rio qualification. In that fight in Samsun, she knew she had left it hanging too close and it went to the Azeri boxer. Disappointed but not shocked. With Mossely, Taylor thought she had it won. She was shocked.

Finding the two per cent is now an eight-week task. Her team will return to Ireland with a blank sheet of paper, where they will comb through everything in terms of her physical, emotional and tactical preparation.

Mileage on the clock

At 29, she is actually in her peak years but despite a healthy lifestyle she does have a lot of mileage on the clock. Her first high-level success was in the 2005 European Championships in Tonsberg, Norway, where she won the gold medal, defeating Eva Wahlstrom of Finland. She was 18 years old.

Later that year at the World Championships in Podolsk, Russia, she made it through to the quarter finals where she lost to China’s Kang Kum-Hui – until Mossely, Kum-Hui was the last person to beat her at world level.

It is hard to know from Taylor what toll keeping ahead of the posse has taken on her and whether that decade of perfection and the worry and pressure it brings needs to be addressed.

She does stress and she is a worrier and she empties herself in every bout. The perfect specimen of fitness this week appeared washed out and pale, almost stricken by the effort, sometimes with blood caked in her nose, always dripping sweat. There is a toll to pay.

Her nature is that she holds things close to her chest and won’t look for lame excuses. But there has also been external change over the last year. Billy Walsh is not there and her father Pete is not there.

With head coach Zaur Antia and Eddie Bolger, who has guided light heavyweight Joe Ward to Rio, she has world-class advisers by her side and Antia has been there for many years.

But maybe Taylor’s adapting to the change has been more onerous than she thinks. Walsh, now with the USA team, did not see all of her fight against Mossely but he views any obituary being written for his former star as absurd and premature.

“I think there is a lot that has happened in the last six months,” said Walsh. “Pete has gone out of the equation. Eddie has come and done a good job and Zaur has been there all the time.

“For some people not winning gold is a disaster but she could be a double Olympic medallist. There is no reason . . . she’s 29 years old will be 30 years old on July 2nd. Go back and take stock.

“Since London female boxing has gone through the roof. Katie is in a 60kg division, probably the best division, where the most talent is. There are probably eight of them of real good quality than can pip each other at any given time.”

The issue is that Taylor doesn’t judge herself against Olympic qualification. She speaks of legacy and history, which are already secure.

Her string of World Championships and European titles are part of who she is and they have come to define what she represents as an athlete. The bronze medal this week is, in her eyes, a failure.

In terms of what she set out to do, which was to win another world title and stand alone as the only person in history other than the revered Cuban Felix Savon to have won six world championships. Her goals are fantasy land for everybody else. This week, regardless of what people say to her, she feels she failed.

“I think for Katie she will feel it because her record has always been a source of pride to her because she has remained undefeated,” added Walsh. “But as I said to her after losing that Olympic qualifier in Turkey, there’s no harm in losing that invincibility tag.

“She lost a contest. I saw her having really bad days in sparring where she would have lost. Know what I mean. She’d come back the next day and she’d rectified what was happening, what was going wrong.

Taylor will take a week off after Astana. Boxing in Rio will begin on August 6th, which gives her around nine weeks to get prepared. Maybe it’s time to just stand back and have faith.