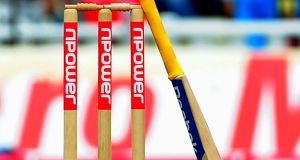 England’s cricketers are poised to make a return to training, either in pairs or with a designated coach, amid growing optimism that international matches can be staged behind closed doors this summer.

The UK government’s Covid-19 recovery strategy permits exercise “with up to one person from outside your household” from Wednesday and now the England and Wales Cricket Board is seeking to establish what this means for all levels of the sport during talks with the UK’s Department for Culture, Media and Sport this week.

The hope for the centrally-contracted men is that, with sporting events deemed to have a chance to resume in empty stadia from June 1st under step two of the strategy, and the ECB lining up six Tests against West Indies and Pakistan from July 8th, they can begin having one-on-one net sessions outdoors, provided a two-metre distance is still observed by the participants.

It would see players paired up with a local teammate or coach - either from the ECB or a county coach on secondment – and though merely baby steps towards a return to training in larger groups, it would offer some cricket-based work after weeks of strength and conditioning work at home.

An ECB spokesperson said: “[WE] will monitor government guidance and continue planning accordingly. If and when appropriate, we will announce our return to training protocols, which will incorporate the implementation of core training principles for our elite players.”

The ECB is continuing to work on the medical and logistical requirements for playing international fixtures in “biosecure” conditions and Ricky Skerritt, the president of Cricket West Indies, has shared his belief that a near full-strength side will travel given the assurances being sought.

Skerritt told i95.5fm in Trinidad: “We don’t have any benefit to gain by sending a weakened team. If the majority of our decision-makers are in agreement with what the ECB is proposing, then one or two players decide that this is too onerous for them, that is their prerogative, we are not going to force anyone [TO TRAVEL].

“Fortunately, we do not expect that because I do not see any reason for anybody to say [THE PLAYERS]will be less safe in the UK than they will be at home under the circumstances.”

The Pakistan Cricket Board is making more cautious noises about their side’s proposed visit in August in advance of a conference call with the ECB on Friday. But Wasim Khan, the PCB chief executive, has stressed that he will not be using the situation to push for England to end a 15-year absence from touring Pakistan on security grounds.

Khan told reporters in Lahore: “It’s a tough situation for everyone right now, and I don’t think it’s fair to take advantage of the situation. The most important thing for us is to revive the game for all countries. If we don’t, we will be facing a lot of problems going forward.”