Coronavirus: I want the facts, but I need hope to get through this 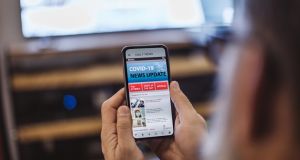 I have developed an extreme FOMO when it comes to the news. Photograph: iStock

I have developed an extreme fear of missing out when it comes to the news, poring over it regularly and searching for updates. I keep my earphones nearby so that I can pop them into my phone at the sound of any news or social media app’s familiar notification ping, and listen to the latest pandemic-related interviews.

It’s an “unhealthy habit”, my husband has told me several times as I waved him off to bed while I remained glued to current affairs programmes.

He, on the other hand, continues to regard the news in his normal fashion.

He’s not having trouble sleeping, unlike me. Nor is he having strange dreams that wake him several times a night – save that one time he woke abruptly, convinced he was wrestling a python on the floor of the youngest boys’ bedroom. That’s what he gets for watching Snakes in the City instead of Prime Time before bed.

Nor is he as prone to emotional outbursts. Some of that is down to the different types of people we are – allegedly, I feel everything – but the rest, I fear, may be down to absorbing too much bad news.

It’s not the first time I’ve struggled with incessant bad news. An old dentist of mine never sugar-coated things at check-ups, obviously figuring I had more than enough of it in my diet already. “You’re still eating too many sweets,” scolded this self-confessed chocoholic at every check-up. Filling after filling after root canal treatment was booked in with the usual warning that if these didn’t work we’d have to proceed to extraction, leaving me fearful I’d be penniless and gnasher-less before I was 35.

I had no choice but to address it. “I need hope,” I told him one day, sitting upright in the dentist’s chair. “I need the truth but I need hope that I’m not a total lost cause. At this stage I’m pricing dentures,” I added, only half joking.

I’m silently making similar pleas with the guests and experts that appear on radio and television, but hope is rarely forthcoming. If anything I come away with any hope I’ve felt completely extinguished. I want the facts, but I want to hear proposed solutions too. I need hope.

I’ve been shielding the children from the news where I can, mostly because I don’t want to take all hope from them too. They know the seriousness of the situation and while they miss their friends and family hugely, and accept all that is asked of them largely without quibble, I know they’re counting on getting back to school in September.

I’m counting on it happening too, in the safest way possible. School is about so much more than education and I worry about the wider impact that all of this is having on our children. As the rumour mill goes into overdrive and the possibility that schools might not open in September is touted, I find my worries growing.

The weekly food shop has become my escape. We’re only short of drawing lots for who gets to go. I’ve taken to playing the trump card – I am trapped at home all week, educating the minions and breaking up rows. I need the escape.

What he hasn’t realised yet is that my timing is not just about avoiding crowds and queues – it’s about avoiding the bedtime battle too. You’ve got to take your wins where you can find them.

What I’ve realised from browsing social media is that I appear to be in the minority in terms of looking forward to the “big shop”.

I’m not sure whether desperation, or the fact that two people in this house continue to go to work most days – meaning we haven’t been able to close ourselves off completely– are the drivers of my calm.

It’s in contrast to the tension that’s typically in the supermarket air, alongside mask-wearing customers, disinfected trollies and Brendan Courtney’s voice telling me to get a move on.

Last week I stopped to ponder the wine aisle. While I considered the bottle of red that might best accompany the large bar of chocolate sitting in my trolley, a young man and his companion were considering beers. Without warning, he emitted the most deafening, silence-inducing sneeze I’d heard in a long time – down the top of his T-shirt. Everyone stopped in their tracks.

He looked up from behind his T-shirt in horror at all who regarded him, his companion visibly dazed by events.

Suddenly, laughter erupted all around.

For a moment there was normality, and it was lovely.