Smith, Labuschagne and the rain do their best to frustrate England 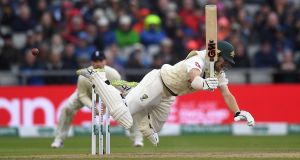 Australia batsman Travis Head falls after being struck by a yorker from England’s Ben Stokes during the first day of the fourth Test at Old Trafford. Photograph: Gareth Copley/Getty Images

The Ashes do not have to be decided on a blissful summer’s day in front of thousands of shirt-sleeved fans furiously biting their fingernails, which was the case at Headingley 10 days ago. Sometimes there can be critical sessions in howling gales and intermittent showers in front of an anorak-clad crowd, huddling stoically together for warmth.

That was the scenario at Old Trafford on Wednesday, where they have never hosted a Test so late in the summer. Australia won a good toss and after 44 overs had advanced to 170 for three, having been reduced to 28 for two in the first half-hour. That was a most satisfactory outcome for Tim Paine’s side. Even better for the tourists was the sight of Steve Smith back in harness, batting just as did in the first Test at Edgbaston.

Smith was soon shuffling towards cover point after which he seemed to have an age to do as he pleased. Straight balls were clipped away on the leg side, full ones driven through the covers, good ones blocked and, most reassuringly, bouncers from Jofra Archer were easily avoided. No ill-effects from his concussion were evident.

Smith remains a Rubik’s Cube of a batsman. However many twists and turns he makes there seems no way to solve the puzzle of how to dismiss him. On this evidence and on what seems a trustworthy pitch Smith could take Australia to their first goal in this Test match: to make themselves impregnable from defeat.

It all started so promisingly for England with Stuart Broad dismissing both openers by the seventh over. David Warner lasted two balls. He left his first one successfully; he left his second unsuccessfully. He withdrew his bat too late and reluctant contact was made – just as he had done against Broad in his second innings at Edgbaston. Any latecomers, minded to deliver their pantomime boos, were disappointed. The England players – and Broad in particular – were cock-a-hoop. This was the fifth time he had dismissed Warner in the series.

Marcus Harris played one sweet square drive but soon he was lbw to Broad, who has become so adept at bowling from around the wicket to left-handers. He hints at away swing but sometimes, as Harris discovered, the ball keeps coming in. So Smith was at the crease with the ball still new and Archer in the middle of his first spell, just what England wanted.

But there was no further progress for England in the morning session and Smith’s rehabilitation was remarkably stress-free. Archer did his level best to inconvenience him. His third delivery to him was a bouncer but it was easily evaded as the ball sailed over the batsman’s head. In Archer’s next over Smith middled a firm-footed square drive and he was on his way, palpably happy to be back in his natural habitat.

None of the England bowlers could offer much of a sustained threat and there was a reason for that. There was a strong wind gusting across the pitch, sometimes reaching 30mph, which makes finding that elusive rhythm for any type of bowler a forlorn pursuit. Archer, in particular, was neutered by the conditions but none of them were at their best.

Craig Overton, recalled for his first game for England in 18 months, coped better than most. Maybe his experience of bowling alongside his twin brother at Instow in his youth on the windswept North Devon coast helped him.

There were other increasingly familiar obstacles for England: Marnus Labuschagne and, of course, Smith, both of whom tucked away the loose deliveries with the minimum of fuss and the maximum of efficiency. There were consecutive boundaries for Smith against Ben Stokes, a cover drive and a pull shot, all of which suggested that it was business as usual; he even looked comfortable in the stem guards that were now attached to the back of his helmet. Perhaps he has been sleeping in his helmet with those stem guards in place.

Root gave Jack Leach a bowl before the break and stuck with him for six overs, evidence that the left-arm spinner was able to find a little turn on a dry surface, albeit after being cut for two fours in his first over. Spin bowlers do not like billowing gales much either. By lunch Australia had recovered all too rapidly to 98 for two from 26 overs.

No more play was possible until 4pm, by which time the wind was stronger; for a while the bails were removed from the stumps and the bowlers were constantly buffeted. Mind you they must have felt more comfortable than those who had bought tickets at the top of the massive temporary stand at Old Trafford that has a capacity of 8,500.

Archer switched ends for his second spell and bowled more bouncers, but none of them were that venomous; Broad showed no liking for the Anderson End and both Australians posted their half centuries. Once again Labuschagne, who might not have been playing in this series if Archer had not hit Smith on the head at Lord’s, looked at home at this level. Meanwhile Smith soon reached his eighth consecutive half-century in Ashes cricket.

Overton managed to remove Labuschagne with a fine delivery that passed through his gate before removing the heavy bails that had now been placed on the top of the stumps. But soon Travis Head was scurrying around alongside Smith to good effect. Another brief storm ended proceedings and England were probably grateful for some respite in the hope of more benign bowling conditions on Thursday. – Guardian