Smith feels the pressure again as Root shines under the lights 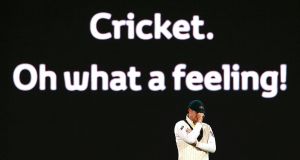 The twilight zone. Though 24 hours later than many expected, England got their moment under lights on the fourth evening in Adelaide and through Joe Root, Dawid Malan and some pyromaniacal reviews by Steve Smith, somehow the tourists remained in the hunt.

Whatever the result on the final day, this was the kind of session for which day-night Test cricket was designed.

A hooping pink ball, a straining attack and batsmen battling hard to get just shy of halfway in their pursuit of 354 – Ashes cricket might not need the format to sell out grounds but the glow of the outfield, the flash of the pink ball and the changing night sky worked a treat.

This was two and half hours of creeping optimism for those England fans on the hill – deflated slightly late on by Pat Cummins – as Root and Malan nudged, nurdled and generally repelled Australia. Smith, having gone too big, too early in trying to overturn marginal calls became the target for a Barmy Army, who offered sozzled review signs for every appeal thereafter.

Though his bails were lit up late on by Cummins, Malan showed ticker for his 29 having been struck in the face by the brawny quick before surviving a drop at slip by Smith off Nathan Lyon. Root, who reached the close unbeaten on 67 and was joined by the ever-dependable Chris Woakes as nightwatchman, was deeply impressive.

Yes there were brushes with disaster, such as Root surviving on review on 32 when given out lbw to Lyon or the cover drive that burst through the hands of Cameron Bancroft later when he was on 60.

But somehow, through a typically frisky innings and the efforts of his bowlers, the pressure of his decision to bowl at the toss has flipped back onto Smith, whose third day call not to enforce the follow-on that has dominated the local narrative.

After stumps it continued, with David Saker – the Australia assistant coach who was once of the England camp – ruing the fact his side been denied the luxury of using a new ball under lights, such as the tourists had the night before. It was pointed out that Smith had in fact eschewed it.

“In hindsight it probably is [a regret],” conceded Saker. “We probably didn’t think it would move like it did [on the third evening] and it was tough. Jimmy Anderson was magnificent and Chris Woakes was very good. Given those conditions to ours, we could have done a similar job.”

On the delight the England fans took at Smith burning reviews and then seeing decisions go against him, Saker added: “I was on the other side for five years and I did enjoy the Barmy Army – it was wearing a bit thin today. But they are part of the beauty of Ashes cricket.”

The surge of travelling optimism had begun from a low point as, just six overs after the dinner break and under the developing violet sky, James Vince trudged off with 15 to his name and the score 91 for three. A wafty drive to a wide one from Mitchell Starc, a snick, and a cerise gift for the otherwise embattled Peter Handscomb at second slip – this was a case of Vince and repeat.

From his 12 dismissals to seamers at Test level, there have been nine held between keeper and gully.

“Nick city” was how the likeable Kerry O’Keefe, on the TripleM radio commentary, described the right-hander’s open bat face in his first innings just seconds before Josh Hazlewood exploited this exact glitch via a tame punch to a ball.

But what to do?

England have selected Vince in the hope that the right-hander’s game can transfer to Australia’s surface in the way his supposed clone, Michael Vaughan, managed 15 years ago. In his first innings 83 at Brisbane, you could see why the punt was taken.

In reserve sits Gary Ballance, currently mixing the drinks – isotonic, not gin and tonic – on his second successive tour, between which was a brief third spell in the Test side last summer in which he got set in three of his four innings without ever kicking on. Remember, it was only his broken finger that opened the door for the since discarded Tom Westley.

Ballance will likely get his chance in the two-day tour match at Perth this weekend but counting against him – beyond the doubts about the Yorkshireman at No3 and the fact Root is wedded to No4 – would be the throwing of yet another top six left-hander to Lyon. The former Adelaide groundsman has gone from sewing seeds to sewing serious doubts.

The Lyon-factor, plus credit from Brisbane, will likely prompt another chance for Vince albeit on the bounciest of the Australian pitches. But when Root and Malan were gutsing it out in the twilight zone, his latest offering was made to look all the more flaky.