England’s quest to retain the Ashes left in some disarray 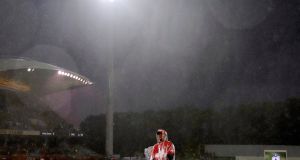 After almost two days of sedate torment for England in the field, the match came alive for 45 minutes of technicolour cricket as darkness descended.

England were batting now. And this was suddenly a compelling spectacle, if an uncomfortable one, for the thousands of English supporters in Adelaide. When Australia were at the crease it was more of a grind to watch. England were skilfully and methodically worn down by superbly disciplined Australian batsmanship, headed up by Shaun Marsh, who hit an unbeaten 126. Only at the end did the home side attack with abandon just before declaring on the formidable score of 442 for eight.

Then a different game ensued, red-blooded, pink-balled cricket in which Mitchell Starc, Josh Hazlewood and, for one ball, Pat Cummins raced up to the wicket, testing the nerve and skill of England’s openers in this wonderful arena, which was suddenly transformed into a South Australian Colosseum. This was not the time to loiter out the back for a bite of cheese and a glass of local red.

Starc, in particular, bowled quickly; the English batsmen tried to counter purposefully. The odd ball whistled past their outside edges; occasionally the pace of the deliveries surprised Tim Paine behind the stumps. This is, apparently, why the stout-hearted opener plays the game. Briefly Mark Stoneman raced along at almost a run a ball. Then a full-length delivery thudded into his pads. Up went the umpire’s finger; the batsman’s review was to no avail and the Australians could celebrate scalp No1.

There followed a concerted appeal from Cummins’s first delivery for a catch behind the stumps when Alastair Cook was on strike. The slip cordon sprinted towards umpire Aleem Dar in celebration but he remained unmoved. We waited for the review to be summoned. Curiously it never was. Then there was a remarkable anti-climax for the home side and their supporters and relief for England. Out of the night sky came a short, sharp shower that was sufficiently strong for play to be abandoned for the day.

Cook and the newly-arrived James Vince were spared having to bat at night any longer. Even so, after two days England’s quest to retain the Ashes is in some disarray.

Sage cricketing observers have this sixth sense: they know that when a captain who has inserted the opposition is contemplating the plusses and minuses of taking the third new ball the plan has gone a little awry. In fact Joe Root did not have to make that decision since Australia declared 11 overs before the third new ball was available. However, there were other indicators that his gamble at the toss had not paid off. In my notebook there is written the question: “Where’s Malan with his leg-breaks?”

It all started so promisingly for England on Sunday morning. Peter Handscomb was lbw in the first over the day and Stuart Broad was so pumped up that he let out a roar from a distance of five feet from the dismissed batsman. I’m not sure this is good form and there was the chance that the match referee, who appears on the big screen as Richard Richardson – Richie (from Antigua) to anyone who knows the game – might take a dim view of Broad’s celebration.

Jimmy Anderson threatened briefly. Twice he experienced the joy of seeing the umpire (Chris Gaffaney) raising his finger after an lbw shout, the first time against Marsh, the second against Paine. Twice the review showed that his deliveries were going over the top of the stumps. Even Anderson conjured a rare wry smile – for a second or two. No doubt the Australian captain was guffawing in the dressing room.

Soon Paine had overtaken Marsh, aided by a pulled drive over mid-wicket for six off Moeen Ali. Both Marsh and Paine kept their selectors smiling. Before the Brisbane Test their recalls to the team were heavily criticised, primarily by those in the south- eastern states where most people live – especially the sophisticates. Marsh is from distant West Australia; Paine is from Tasmania. Both have performed superbly so far.

Just before the break Paine pulled a short ball from Overton into the hands of Moeen at deep square leg after hitting a skittish 57. Then after the interval Mitchell Starc miscued a pull shot against Broad and Australia had sunk to 311 for seven. That was the last wicket to fall in the middle session.

Initially Pat Cummins blocked furiously alongside Marsh; it took him 37 balls to get off the mark. But eventually Root ran out of ammunition. Moeen could make no impact and Cummins, an invaluable No9, gradually became more offensive. Meanwhile Marsh calmly kept going. Just before dinner he completed his fifth Test century and his first against England with a perfectly placed pull off Chris Woakes.

After dinner Australia had a quick heave. Cummins was caught at third man to give Overton his third Test wicket and there followed an ugly piece of cricket when Nathan Lyon received a succession of bouncers from Broad. In this series when the tailenders are batting we are witnessing bodyline with fielding restrictions, whichever side is bowling – though it is obviously the case that the Australian bowlers can propel much faster bouncers. The umpires are not inclined to intervene and, as with sledging, it appears that the era when the captains were the ones who decide where the line should be drawn has long since passed. That’s a pity but that’s the way they want to play it.

1 Gordon D'Arcy: Ireland must go after victory by frightening France into mistakes
2 Henshaw the only change as Andy Farrell names Ireland team for Paris
3 Champions Cup draw: Irish provinces learn their opponents for this season
4 Cian Healy: ‘Realistically I got away with murder when I was younger’
5 Giovagnoli’s appointment at Dundalk ‘a great story’ says Arsenal boss Arteta
Real news has value SUBSCRIBE