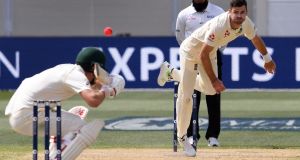 Jimmy Anderson does his best work after midnight. Australian time. For cricket fans in this country, the presence of the world’s most productive seam bowler of this decade is more theoretical than palpable. He lives on cable TV in the middle of football season.

But his record in Australia? That is a story we’re familiar with. Sure he did well in 2010-11, but got properly carted in the whitewashes either side. He’s the guy George Bailey hit for a record 28 runs from an over. Bailey played five Tests.

Anderson isn’t that quick either, which is readily equated to not that good. Sure, he can nip it on a green-top in mild England, but how does he go on a flat track in an unforgiving Australian summer? Not well enough to be concerned about. Right?

Perhaps that’s what Steve Smith thought when allowing Anderson use of a new pink ball under lights. By the assessment of Australia’s assistant coach, David Saker, it backfired, giving England a puncher’s chance of a ridiculous victory. One made possible by Anderson, who picked a handy time to record his first five-wicket bag in Australia. Overall, he now has 25 of them, second only to Ian Botham’s 28 for England. Yep – just another trundler.

Being able to bowl rather than follow on was a gift that kept on giving for the 35-year-old, as he attacked the hosts’ edges and stumps until they were routed. No Australian got beyond 20, with none more exposed than Peter Handscomb. The Australia No5 was utterly worked over, before giving Anderson his wicket with a stroke he will never want to see on replay. It was a fitting end given just how out of touch he finds himself at this crucial part of the summer.

“Our plan is working,” Anderson said of success against the Victorian, attacking his stumps early when the right-hander sets up deep in the crease. Between Brisbane and Adelaide, Handscomb was dismissive of scrutiny about his stance from former players. He had succeeded against some of the best bowlers in the world, went his argument, so why should it be different against Anderson? That might need a rethink.

That’s easier than it sounds, as Simon Katich can attest. In the 2005 Ashes, he was suffering a similar problem in balance to the one he identifies in Handscomb at the moment. The intensity of that series made it impossible to make a meaningful technical adjustment mid-stream.

It leaves Handscomb vulnerable for the first time since winning his baggy green. On paper that looks incongruous to his batting average, north of 47 in 12 Tests so far; a man who played a vital hand to save a match in India earlier this year, and a very brave one to survive in the brutal heat of Bangladesh. Captaincy has been in Handscomb’s future, not exile.

Yet here he is, the man most likely to make way if Australia do elect to change the composition of their XI in favour of a batting all-rounder for Perth – the nation’s least forgiving surface this season. In the most recent two Sheffield Shield games at the ground, more than 2,800 runs have been tallied with 325 chased in one. It is not the place to go without a back-up for an injury-prone attack.

Mark Waugh, a national selector, gave an insight into that preference last week. “Ideally, you want a man at six who bowls seam-up as your batting all-rounder.” With Mitchell Marsh bowling again, and having clobbered 95 and 141 in the aforementioned Waca run-fests, these dots don’t take much joining. And his older brother Shaun is going nowhere.

That this is a point of interest speaks to another sketchy day at the office for Australia. Teams that romp to a 2-0 lead and rub their opponents’ nose in it don’t get changed. “The last two days haven’t gone to plan,” Saker observed of the ongoing sore of having that second bat. “In hindsight, we didn’t get an opportunity to bowl with the new ball under lights. That was our chance. Maybe we got it wrong.” What he said.

Meanwhile, England go to bed halfway there, and still very much living on a prayer, but with confidence renewed from nowhere. “We are delighted to be in this position, to be in any chance to win this game,” said Anderson. He has earned his side a grandstand finish.