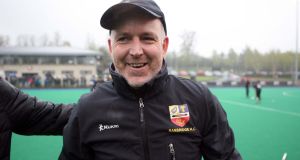 Mark Tumilty will head up the Irish senior men’s coaching team as head coach with assistance from Jason Lee for their upcoming Olympic qualifier campaign in Canada in late October.

The former Banbridge man takes on the role vacated by Alexander Cox in the wake of the European Championships.

Tumilty led the Co Down club to two IHL titles and two Irish Senior Cups as well as numerous Ulster titles, in addition to a memorable EHL group win ahead of an array of stars from Belgium’s Royal Leopold and Paris Saint Germain.

He stepped away from the Bann role this summer after nine years but he is delighted to take on the job for the Olympic qualifying endgame.

“I am extremely proud to be offered the opportunity to coach the Irish senior men’s team,” he said. “It has all happened very quickly and it would not have been possible for me to take this role without the support of my wife Cara, my children and my employer, Ulster Bank.

“However, I feel if we can get our preparation correct in the coming weeks – both on and off the pitch – we will give ourselves an excellent opportunity to qualify for Tokyo 2020.”

Lee, meanwhile, brings with him a wealth of head-coach experience. He spent a decade as England’s men’s leader before a brief spell with the women’s side, encompassing three Olympic Games and a Euro gold in 2009. He previously played in two Olympic Games in the 90s.

Both appointments are on a short-term basis. Tumilty will be based here in Ireland while Lee will travel over from the UK as appropriate for upcoming camps.