Fionnuala McCormack back to front Irish medal hopes in Lisbon 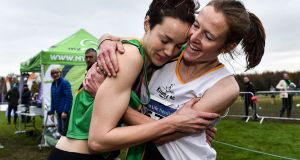 Fionnuala McCormack and her sister Una Britton could help Ireland to a team medla in the ropean Cross Country in Lisbon. Photograph: Sam Barnes/Sportsfile

There is an 80-page statistics handbook to go with Sunday’s European Cross Country in Lisbon, listing off all the main achievers over the years going back to the inaugural event in 1994, and there chief among them is Fionnuala McCormack.

The last thing McCormack ever chased or needed was any additional recognition, not when her results typically spoke for themselves anyway, but when lining up on Sunday she will make a record 16th appearance in the event, one more than any other woman.

She will also be making a record 38th senior appearance for Ireland, further extending her number on both Sonia O’Sullivan (33) and Derval O’Rourke (32). At age 35, and with her Tokyo Olympic marathon qualification already secured, she’s far from finished yet.

McCormack is not in Lisbon to make up the numbers either. After running away – and the term is justified – with her ninth Irish title in Abbotstown last Sunday week, the Wicklow athlete promptly declared her intent to have another crack at the European title she won twice before, as the first back-to-back women’s winner, in 2011 and 2012.

Since making her first appearance in the junior race in Thun in Switzerland in 2001, finishing in 74th place (slow developers take note), she’s also finished in the top 10 in the senior race on another eight occasions in all, including a fourth place in 2010, 2013 and 2015, before finishing in 12th place in her last attempt in Slovakia in 2017.

Winning that year, and for the last three in succession, was Yasemin Can, the Kenyan woman formerly known as Vivian Jemutai who only became eligible to compete for Turkey in early 2016, despite never once living or training there for any extended period of time. That loophole in such transfers since shut down, Can, still reportedly only 22, is back seeking a fourth successive title, along with fellow former Kenyan Meryem Akda, who finished second in 2016.

At the time that prompted one of the rare outbursts from McCormack: “I don’t think it’s right that people can just swap countries and change names just whenever they feel like it. I don’t have a problem with particular people. I kind of do, because I know it’s part of their decision, and I don’t think that those decisions should be allowed. And I think it’s from the top the changes need to be made. It’s not an individual athlete going from Kenya to Turkey, just for the craic, like.”

Conditions at Bela Vista Park will be very different from Abbotstown: it will be dry, it will be sunny, and it will be fast

Can’s form this year, however, is a little unclear, at least compared to McCormack, clearly relishing her return to the country just six weeks after running the Tokyo Olympic marathon time, and who back in March finished second best European, in 18th, at the World Cross Country in Denmark in March, just six months after giving birth to daughter Isla.

However conditions at Bela Vista Park will be very different from Abbotstown: it will be dry, it will be sunny, and it will be fast. After younger sister Una Britton also wrote her own little piece last month, finishing third to make them the first siblings to share the same podium in a senior women’s cross country event, she too is rewarded with her place in Lisbon and team medals are also within reach, especially with Ciara Mageean also on board, was not long back after a break from the World Championships in Doha.

McCormack has helped the Irish women to medals three times before, the last in 2015, but with only three to score it will be tight. Two other former champions, France’s Sophie Duarte and home favourite Ana Dulce Felix, will also toe the line.

Ireland’s best chance of a team medal may well lie with the women’s under-23 team, which features the US-based trio of Stephanie Cotter from Cork and Tyrone twins Eilish Flanagan and Roisin Flanagan, who last month finished 1-2-3 in the American Division 2 Cross Country Championships with Adams State, also winning the team title with the lowest score in the college’s history.

With 40 countries, and 602 athletes, no medal will be easily won. Liam Brady from Tullamore Harriers will lead the senior men’s team fresh from winning his first senior men’s title, with Sean Tobin also back in form after finishing 10th best in European last year, that race also seeing reigning champion Filip Ingebrigtsen from Norway look to again fend off the African-born runners in Belgium’s Isaac Kimeli, and Ali Kaya and Aras Kaya from Turkey.

The first race starts at 10am with live streaming available at european-athletics.org