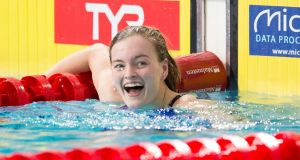 There were contrasting fortunes for Ireland’s Shane Ryan and Mona McSharry on day three of the European Short Course Swimming Championships in Glasgow on Friday.

Ryan finished sixth in the final of his main event, the men’s 100 metres backstroke final, while McSharry made short work of her 100 breaststroke semi-final, posting the fastest qualifying time to make Saturday’s decider and is now the gold medal favourite

Ryan broke his own Irish senior record for the fourth time in a month in 50.42 seconds in the final, but that was no real conciliation for the 26-year-old as he finished outside the medals in his main event.

“I missed a turn and I know I can go much faster,” said a disappointed Ryan after his race, won by the Russian Kliment Kolesnikov.

Ryan still has the men’s 50 metres breaststroke to come, an event in which he is a world bronze medallist, but after the race he described the 50 as a “fun event”.

In contrast 19-year-old Mona McSharry, who claimed bronze in the European 50 metres breaststroke on Wednesday, will go for golf from lane four on Saturday at 5.15pm (Live on RTÉ Player).

The Sligo teenager, who swims out of the tiny Marlins swimming club in Donegal, produced an outstanding performance to win her semi-final in a world-class time of 1:04.36, a new Irish record and .27 of a second ahead of the rest of the field for the final.

Meanwhile, Eoin Corby of Limerick set a new Irish junior record in winning his heat of the men’s 100m breaststroke in 59.63 seconds, although it was not fast enough however to make the semi-finals.

The 17-year-old has broken all three Irish Junior breaststroke records in the past three days.