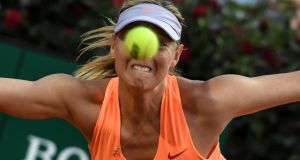 Maria Sharapova has been denied a wildcard entry for the French Open. Photograph: Andreas Solaro/Afp

The French decision, a stunning one, not to award Maria Sharapova a wildcard entry to the second Grand Slam of the year at Roland Garros sets up the All England Club for a withering reaction should they demure for Wimbledon and let her in.

Under the weight of Sharapova’s celebrity and appeal, the club must decide whether she should be rewarded for a 15-month absence from the game for a doping ban and fast-tracked into the main draw.

A simmering Women’s Tennis Association (WTA), out of step with many players on the issue, are perceived to be more exercised about getting the world’s biggest female earner back into mainstream tennis than taking a principled stance.

“There are no grounds to penalise any player beyond the sanctions set forth,” said WTA chief Steve Simon.

In Paris they saw it differently.

Closing the door on her wildcard entry, regardless of how it was couched, was an ethical call taken by the French organisers. As Sharapova also required a wildcard to play in the Roland Garros qualifying tournament, the decision effectively said we do not want you in our tournament.

It is a brave stance that will be widely debated and puts Wimbledon in the position of falling into step with the principled French or the raging WTA.

It asks Tim Henman, who chairs the Wildcard Committee in SW19, if Wimbledon wishes to miss out on an opportunity to take a hard line on doping.

The omens are not good with the BBC reporting that the former Wimbledon champion will be offered a wildcard into next month’s Aegon Classic in Birmingham. Sources told the BBC that discussions between Sharapova’s team and the Lawn Tennis Association are under way.

The issue is not whether Sharapova has served her ban or not because she has. It centres on whether she should have to work her way back up the rankings and qualify for tournaments on merit or be given a helping hand at every turn.

It questions whether a player returning from a drugs ban should be favoured over other low ranked players, who also want wildcard entries and if the struggle to earn position is also central to the notion of punishment. Many players feel that it is.

As a representative body their care is for all players and the health of the sport, the wonder being how that can be if they are not considering the wider implications for the women’s game and what message the warm embrace of Sharapova sends.

If the WTA could face the issue in a different way, and they cannot, Sharapova could become the biggest deterrent they have ever had to drive home a policy of no tolerance for drugs in tennis. Instead they are in disagreement with their members.

A credible sense of contrition from the player herself would help. But that is not her nature.

Those objecting players see Sharapova’s profile and global appeal to have made the offence an even greater outrage, a brand name in the sport inflating the damage with the WTA insisting that her tarnished celebrity should grant favours.

The WTA see her absence hurting tennis because she has drawing power and with that tickets are sold for tournaments, there is wider media appeal and sponsors rub their hands.

Sharapova can still play at Wimbledon on merit by following the paths of James Magee and Conor Niland through the qualifying event in Roehampton, or, the club can elevate her into the main draw.

Like the French, who more than likely had to bear the pressure exerted by global companies supportive of Sharapova such as Nike, so Wimbledon will experience similar weight bearing down.

Everyone is watching. But for the All England Club, the officer class in proprietary, the June 20th decision should present no dilemma. Should it?