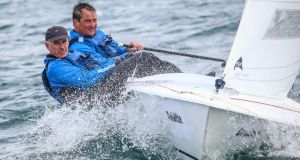 As the International Flying Fifteen class prepares for one of next year’s Irish sailing highlights, seven-Irish boats were confirmed on Thursday as “automatic qualifiers” for the 85-boat Dublin Bay-based 2019 World Championships. The qualifications come just ahead of next week’s announcement of a title sponsor for the event.

The National Yacht Club hosts will announce car marque Subaru as title sponsor on Tuesday in a repeat of 2003’s sponsorship arrangements when the World Championships last sailed from Dún Laoghaire.

It’s no surprise that National Championship winning duo David Gorman and Chris Doorly of the host club top the rankings on 174pts to lead the Irish fleet challenge. In a promising run, the pair also took fourth at the British Nationals last July, so the first ever win of the World title could yet be on the cards. Of the seven Irish through so far, four are from Northern Ireland, two from the National Yacht Club (NYC) and one from Waterford Harbour.

Further Irish places may become available in the ‘pre-worlds’ event immediately preceding the Worlds, but only if other nations don’t take up allocated slots.

The 2019 Worlds is set to welcome teams from seven nations or more with British teams dominant. Reigning World Champion Steve Goacher and Tim Harper of England and European Champions Hamish Mackay and Andrew Lawson of Scotland are both confirmed for the Bay so it will be consistency will be critical to any top result.

As Howth Yacht Club’s KBC Bank Autumn League concludes this weekend, the north Dublin club will experiment with onboard race trackers for the first time when its long-running Laser dinghy series returns on November 4th. Olympian Dan O’Grady and Tokyo Olympic campaigner Ewan McMahon are among the entries lined up. Howth’s own Olympic Radial campaigner, Aoife Hopkins, is also going to race part of the series at least.

Dublin Bay Sailing Club (DBSC) is expecting a bumper entry of 70 boats or more for its annual Turkey shoot series that also begins on November 4th. This year, organiser Fintan Cairns has announced Citroen as the sponsor for the seven race Sunday mornings series.

In the largest cruiser fleet of recent years on the Shannon Estuary, the Combined Clubs October Series hosted by the Royal Western Yacht Club of Ireland attracted 23-boats at Kilrush in County Clare last Sunday.