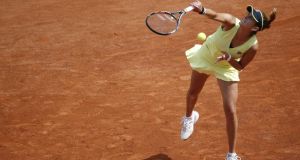 The pre-tournament shortlist of favourites for the French Open women’s crown continues to shrink and for a while it looked as though the name of top seed Serena Williams would also vanish on Thursday.

Shortly after former world number one Caroline Wozniacki was knocked out by Julia Görges, meaning the third, fifth and sixth women’s seeds have all departed before round three, 33-year-old Williams stepped on Court Suzanne Lenglen to face unheralded 21-year-old German Anna-Lena Friedsam.

It looked like a mis-match but 105th-ranked Friedsam gave the 19-times Grand Slam champion a torrid time, taking the first set off the American before a nervy Williams recovered to scrape into the third round 5-7 6-3 6-3.

Twice former champion Williams has suffered at the French before, namely last year when she was beaten by Spain’s Garbine Muguruza at the same stage and more memorably in 2012 when France’s Virginie Razzano knocked her out in round one.

And with her trademark groundstrokes regularly sailing over the baseline and even her fearsome serve deserting her in the first set – she was broken three times – another blot on her incredible grand slam record looked possible.

Even when she led 4-2 in the second set Williams looked shaky, going 0-40 down and dropping serve, but once she got level and broke Friedsam’s serve at the start of the decider she finally began to relax.

She will have to sharpen up considerably though against former world number one Victoria Azarenka in the next round.

Wozniacki has now failed to reach round three in Roland Garros since 2012 as the Dane was out-powered by a superb Görges performance.

Görges, ranked 72nd in the world, has won all three meetings between the pair on clay and Wozniacki admits she has a mental block when she faces the German.

“I think especially on clay she has a way to make me feel like I’m not playing very well,” Wozniacki said.

“Obviously she has given me trouble in the past and she gave me trouble again today so that kind of sucks.

“I would have liked to have been through to the next round, but I’m not.”

Fourth seed Petra Kvitova survived her own trial, however, coming back to beat Spain’s Silvia Soler-Espinosa 6-7(4) 6-4 6-2 despite 54 unforced errors.

In contrast to the shocks in the women’s draw, the men’s favourites have been largely untroubled.

All eyes have been on defending champion Rafa Nadal as the Spaniard battles to rediscover his mojo in time for a bid for a record-extending 10th French Open title, and their were plenty of encouraging signs as he beat compatriot Nicolas Almagro with relative ease to reach the third round.

Nadal took his stunning Roland Garros record to 68-1 with a routine 6-4 6-3 6-1 victory – his fourth without dropping a set against Almagro on the Paris clay.

The biggest cheers were reserved for elsewhere though where two epic contests evolved.