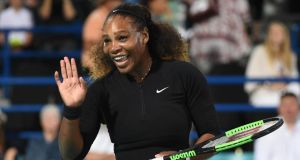 Serena Williams hailed her comeback match against Jelena Ostapenko as “perfect” but stopped short of committing to a defence of her Australian Open title.

The 23-time grand slam singles champion was back on court for an exhibition clash with French Open champion Ostapenko less than four months after giving birth to daughter Alexis Olympia.

Williams struggled to start with, rolling in serves and moving sluggishly, but grew into the challenge and, despite losing 6-2, 3-6 (10-5), there was more than enough in her performance to send a message to her rivals that she will quickly be a force to be reckoned with.

The 36-year-old said in a press conference shown on sport360.com: “I’ve had a lot of comebacks from foot surgeries, knees, but I’ve never had a comeback from actually giving birth to a human being.

“So in my eyes I feel like it was a wonderful match for me. I just am really proud of being out here, being able to compete.

“I had a ton of trepidation out there, but as the match moved on I was less afraid; I’m not going to fall over and break, I’m going to be okay, and the more I played, the more confident I felt.

“This was a wonderful opportunity to test where I am not only physically, but mentally. You have to get over that hump of, ‘Go for the shot, you’re going to be okay’, because it’s a lot that goes on through a female’s body when you have a baby. I think it was perfect.”

Williams admitted she struggled to keep her focus on the court and turned to her support camp, which included husband Alexis Ohanian, to make sure her daughter was okay.

“It felt good to be back out there,” she said. “I missed playing, I missed the competition, I missed the crowd, the atmosphere. It’s so much that you don’t see.

“It was definitely a new experience. It played out pretty well. In the middle of the match I looked over and I was like, ‘Is Olympia okay?’ Because usually I’m always with her.

“So I don’t know how I’m going to be able to manage that, but maybe I’ll just always look over in the middle of a grand slam and be like, ‘is Olympia okay?’ But when she gets older she’ll be able to actually come out to the matches.”

If that last comment suggested Williams plans to play for some years yet, she has not yet made up her mind about the Australian Open, which starts on January 15th.

Before the birth of her daughter, Williams revealed her “outrageous plan” to defend the title she won when nine weeks pregnant.

Not surprisingly, she is clearly short of top shape, and her serve and movement need work, but after this performance it would be a surprise if she was not in Melbourne.

“I’m taking it one day at a time,” she said. “I’m going to assess everything with (coach) Patrick (Mouratoglou) and my team and go from there.

“I don’t know if I’m totally ready yet or not. When I come back, I definitely want to be competing for championships.

“I think everything is so much easier for me having my daughter at home waiting for me and knowing that I’ve won 23 grand slam singles titles. I don’t have anything to prove but I just want to go out there and play. I’m not done yet.”