Serena Williams gets over wretched start to progress in Paris 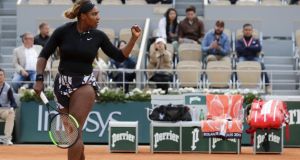 Serena Williams survived a briefly wretched opening to the French Open and, despite recovering well to trounce the world No 83, Vitalia Diatchenko 2-6 6-1 6-0, she is yet to convince her peers and rivals she can last a tournament, let alone rediscover the magic that lifted her to 23 Grand Slam titles.

She is not exactly a sitting target and she will play better than this but the Serena of old, the three-times champion of Paris, is a memory at the moment. She needs one more Major to match the all-time record of Margaret Court. It is an assignment that grows more difficult with each passing month.

A year ago Williams chose the French Open – in her favourite city – to announce her return to the big time after she survived the most difficult of first pregnancies eight months earlier. She had to withdraw with a shoulder injury on the eve of her fourth-round match against Maria Sharapova and her comeback has continued to splutter ever since. Williams, who turns 38 in September, has finished only five tournaments in 12 months – including the Australian Open – and, through illness or injury, has quit after only one match in her past three.

On Monday she looked in danger of not getting out of the first round of a Slam for only the second time in 71 matches – the other slip-up occurred here in 2012 against Virginie Razzano – before her serve got her out of trouble against a solid but unthreatening opponent.

Speaking in French to the delight of the home crowd on Court Philippe Chatrier, she told her friend Marion Bartoli: “I was worried about playing this match and am relieved to have come through it in the end. I’m very happy to be back in Paris and looking forward to the rest of the tournament.

“I didn’t play great in this match but I’m happy I got through it. I knew that I couldn’t get worse. I just had to hang in there. I’m a little upset because I have been practising extremely well. I am just going to maybe take a deep breath. I think I was also a little nervous today.”

Caroline Wozniacki completed a hat-trick of first-round exits on red clay this season as she became the third former world number one to fall in the first round.

The 13th-seeded Dane suffered a spectacular collapse in a 6-0 3-6 3-6 defeat to Russia’s Veronika Kudermetova on Court Philippe Chatrier on Monday, just 24 hours after Angelique Kerber and Venus Williams were also sent packing.

Wozniacki, who had spells as world number one between 2010 and 2012, has failed to win a match on red clay this year as she was forced to retire with back and calf injuries midway through her opening-round contests in Madrid and Rome.

Wozniacki, who had reached the Charleston final on green clay before she suffered the injury setbacks, paid for her lack of match practice after a near-perfect start on Monday.

“I think I played really well in the first set. I played aggressive. I played the way I wanted to play. And then I think she got very lucky in the start of the second set and . . . took advantage of the opportunities she got,” Wozniacki told reporters.

“And then I just lost a little steam in the end and I made some unforced errors that I normally don’t do, so that was very frustrating.”

The 28-year-old Wozniacki has never made it past the quarter-finals in 12 appearances at Roland Garros.

The Dane suffers from arthritis but said her condition had not been bothering her lately.

“Lately I’ve been feeling good with that, so when I feel good, I just do what I normally do and just go through every day and work hard,” she explained.

But the calf problem hampered her preparations for the French Open even if she did not feel any pain on Monday.

“Lately it’s just been my calf, which has nothing to do with the other thing. And sometimes you’re just unlucky as an athlete,” she said.

“You get hurt, you get injured, and you just have to try to work through that.”

Wozniacki, who has won just nine matches in 2019, will now focus on the grasscourt season.

“It hasn’t been a great year for me so far. And I’m just going to try and work hard and try to turn that around,” she said.

Petra Kvitova earlier withdrew from the tournament before her first-round match due to an injury to her forearm but the Czech is hopeful she will be able to compete at Wimbledon.

“I’m so disappointed to have to announce my withdrawal from Roland Garros,” the sixth seed said on Twitter before her match against Romania’s Sorana Cirstea.

“I’ve had pain in my left forearm for a few weeks and last night an MRI confirmed a grade two tear which could unfortunately could get a lot worse if I play today,” added the left hander.

“They said for now two to three weeks off, which means no tennis, of course, because it’s my left forearm. I’m gonna do some fitness and everything what I can do and to kind of prepare my body for the tennis on the grass then. Of course that I’m staying positive for the grass season.”

The Czech player has been replaced in the draw by lucky loser Kaja Juvan of Slovenia.

Kvitova, a semi-finalist in Paris in 2012, made a strong start to the clay court season by winning the title in Stuttgart and reaching the quarter-finals in Madrid.

A left calf injury in the third round at Rome affected her momentum heading into Roland Garros, the venue of her return to tennis in 2017 following a knife attack. – Guardian and wires

Man United’s net debt rises by €85.7m to €455.5m in three months 13:17
Alby Mathewson joins Ulster until the end of the season 11:44
England and Eddie Jones at the vanguard of rugby’s hybrid era 13:18
Liam Williams rejoins Scarlets from Saracens early 11:06
Deontay Wilder blames weight of ring-walk costume for Tyson Fury loss 08:17
Here is your handy guide to sport on television this week