Wawrinka tames heat and young Frenchman at US Open 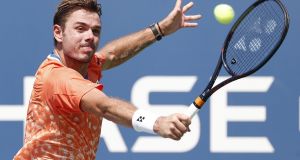 Stan Wawrinka of Switzerland hits a return to Ugo Humbert of France during the third day of the US Open Tennis Championships in Flushing Meadows, New York. Photograph: Justin Lane/EPA

Stan Wawrinka fought off punishing heat and a youthful challenge from French qualifier Ugo Humbert to earn a 7-6 (5) 4-6 6-3 7-5 win on Wednesday and a spot in the US Open third round.

With temperatures at the Billie Jean King National Tennis Center in Flushing Meadows, New York City, once again nudging towards 38 degrees, Wawrinka and Humbert battled for nearly three hours and 30 minutes in the shadeless oven that is the Grandstand Stadium court.

Wawrinka, who won the US Open in 2016 but was unable to defend his title last year after undergoing knee surgery, had his fitness put to the test by the 20-year-old Humbert playing in his first Tour-level event.

Humbert let the three-times grand slam-winning Swiss know he was in for a long and sweaty afternoon after the first set went to a tiebreak and he levelled the match by taking the second.

But the barrel-chested Wawrinka’s lived up to reputation as a battler and grimly hung on to take the next two sets.

Meanwhile, Venus Williams beat Italy’s Camila Giorgi 6-4 7-5 to set up a possible third-round match against her younger sister Serena. Venus, seeded 16th, powered through the first set but appeared to lose energy toward the end of the second in broiling conditions inside the newly built Louis Armstrong Stadium. She said the crowd’s encouragement had helped her. “I felt the energy, definitely,” Venus said. “That love-40 game at four all was not looking good and you guys really got me through that.” Venus Williams won the US Open in 2000 and 2001.

Serena was about nine weeks pregnant when she won the title in Melbourne, and Venus joked: “The last time we played at the Australian Open it was two against one, so at least this time it will be fair. I hope she makes it.”

Defending champion Sloane Stephens avoided an early exit, recovering from a set down to defeat Ukrainian qualifier Anhelina Kalinina 4-6 7-5 6-2. Kalinina, 21, was the runner-up in the girls’ singles in 2014 and was playing in her first senior grand slam tournament after coming through qualifying. She took advantage of errors from Stephens to win the first set and then fought back from 4-1 down in the second set to level at 5-5 but the American held firm to win her ninth successive match at Flushing Meadows.

4 The 22 original Premier League teams: Where are they now?