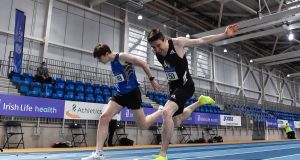 According to their detailed qualifying criteria, Athletics Ireland selected a 24-strong team for next month’s European Indoor Championships based chiefly on consistency and repeatability of performance, ranking and performance-time curves, as well as championship performance history.

No mention of a brand or model of running spikes, or who may or may not be wearing them, given all the criteria around that was already detailed by World Athletics back in January of 2020, with a few minor revisions last July, thus known and agreed by the sport for over a year already.

Truth is the majority of the Irish athletes qualified for these latest championships - set for Torun in Poland from March 5-7th - were racing in what might be considered standard running spikes. Without the addition of any such carbon plate, so all is well within those rules now laid down by the governing body of world athletics. Which is essentially all that matters on the issue.

The team of 24 athletes, equally spread between 12 men and 12 women, is the largest Irish selection in the history of championships, which began in 1970, and includes two medal winners from the last edition in Glasgow in 2019 in Mark English (800m) and Ciara Mageean (1,500m). Both came away with bronze medals.

English, who also won silver in Prague in 2015 and outdoor bronze in Zurich in 2014, also travels in excellent form having improved his Irish indoor record to 1:46.10 at the Elite Micro Meet in Abbotstown on Saturday.

Joining English in that event will be 18 year-old Leaving Cert student Cian McPhillips, who pressed him so hard to the line in that race, and was rewarded with an Irish junior and under-23 record of 1:46.13. Third-placed John Fitzsimons was also inside the standard with his 1:47.80 and is also named for Torun.

Indeed there is the full allocation of three Irish athletes in seven events; the men’s and women’s 60m, men’s and women’s 800m, men’s 1,500m and 3,000m, and the women’s 400m. Several other Irish athletes had also qualified in those events, and miss out as result, having run in some cases just marginally slower times that those selected. They include Brian Fay in the men’s 1,500m, and Louise Shanahan (2.01.67) and Iseult O’Donnell (2.02.29) in the women’s 800m.

Jumping to number one in that event in the US on Sunday night was Síofra Cléirigh Büttner, breaking the Irish indoor 800 metres just four days after Nadia Power had broken it for the second time this season, writing it back under her own name in the process.

Competing on Sunday evening at the American Track League meeting at Fayetteville, Arkansas, Büttner took almost two seconds off her previous best, clocking 2:00:58, and with that taking a sizeable chunk off Power’s previous record of 2:00.98, set in Poland last Wednesday night. Power first broke the record at the end of January, running 2:02:44, with that breaking Büttner’s previous record of 2:02.46, which had stood to the 25 year-old since 2018, set during her time at Villanova in the US.

Also set to travel in form is Phil Healy, who improved her indoor 400m best to 51.99 on Sunday, the sixth fastest by any European this season, with Sophie Becker (53.20) and Sharlene Mawdsley (53.56) also inside the qualifying standard in that race; likewise Leon Reid, who improved his indoor 60m best to 6.68 seconds, with Israel Olatunde of UCD AC breaking the Irish Under-20 and Under-23 records with his 6.73.

Four of those Irish athletes selected will get one more quality test run at the World Athletics Indoor Tour Final this Wednesday afternoon: Reid (60m), Power (800m), Andrew Coscoran (1,500m) and Sarah Lavin (60m Hurdles), with Louise Shanahan also getting a start in the women’s 800m. TG4 has announced it will broadcast the meeting live from Madrid, beginning at 3.55pm and will include all the races up to the last race at 6.10pm.

2 Sarah Stirk: From pro tennis dreams to the face of Sky Sports Golf