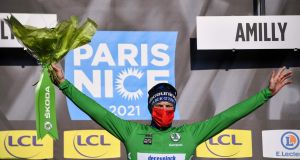 On the stage map the final sprint was described as properly sketchy and Sam Bennett discovered exactly why when narrowly avoiding a crash at the climax of the second day of hard racing at Paris-Nice.

Things were already hectic heading inside the last 3km as Stage 2 sped into Amilly, with several lead-out trains at full gas, before with just over 1km remaining a crash near the front took out some 20 riders. Bennett may have escaped the carnage, tangling with one rider but staying upright, only to find himself a little too distanced from the leaders, with Dutch rider Cees Bol sprinting off the front to take only the second UCI Tour win of his career.

Bennett was approaching fast from inside Bol’s right, the problem being three other riders were also ahead, and he ended up fifth: with that third-place finisher Michael Matthews takes over the race lead by virtue of the four second bonus, and the Australian will now wear the yellow jersey for Tuesday’s Stage 3, a 14.4km time trial around Gien.

Bennett does swap his yellow jersey for another familiar one, taking over the green jersey as the points classification leader, although expressing some disappointment at the timing of his sprint on this occasion.

“I felt I had the legs,” said Bennett, “I just waited too long.” His chase wasn’t helped by another sharp turn with just 500m to go, further proof perhaps there’s no such thing as a guaranteed win in any bunch sprint.

Bol, of Team DSM, made his charge with perfect timing, hitting the front in the last 50m of the 188km stage from Oinville-Sur-Montcient to Amilly, getting ahead of Mads Pedersen, the former world champion who had been put in an ideal position by Trek-Segafredo, who had taken third behind Bennett’s win on Stage 1.

Matthews, of Team Bike Exchange, had already picked collected five bonus seconds during the two intermediate sprints earlier in the day, plus a further four on the line in third, which means he now leads Bennett, Pedersen and Bol by four seconds, with French rider Arnaud Demare fifth, eight seconds back.

Pedersen closed the six-second gap to Bennett with his second place finish (with six seconds), with Bol collecting another 10 seconds for the win.

“The best feeling,” said the 25-year-old Bol. “I had a bit of a struggle at the start of the season and wasn’t good before now. We kept believing and today, with superb help from my teammates we smashed it. The guys from Trek-Segafredo did a strong lead-out but I started my sprint in the right moment and had enough power to make it to the line. It gives confidence for the sprint stages and the other days where we have a chance with the other guys.”

Indeed Matthews was a virtual tie with Bennett even before the finish thanks to his bonus seconds: “I knew I probably wasn’t the fastest so I had to position myself well,” said the Australian.

After being the first Irish leader of Paris-Nice since Stephen Roche in 1990 (and after Sean Kelly’s record seven successive wins from 1982-88), and wearing the yellow jersey for one day, Bennett still has a chance of contesting the green jersey all the way to Nice on Sunday.

Thursday’s Stage 5 offers the sprinters perhaps their last chance to shine in the Race to the Sun, on the 203km long and almost entirely flat run into Bollene.

If he can finish as well as he did on Sunday, Bennett will certainly fancy his chances for a second stage win here, and fifth overall in what is 79th edition of Paris-Nice, as he previously won two stages in 2019 (Stage 3 and Stage 6), plus Stage 3 in 2017.

The Queen Stage on the penultimate day finishes atop a 16.3km climb in La Colmiane, before the finish into Nice this Sunday.