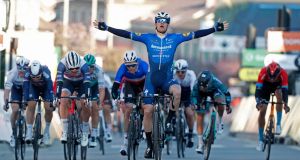 Team Deceuninck rider Ireland’s Sam Bennett celebrates as he crosses the finish line at the end of the first stage of the 79th Paris - Nice race between Saint-Cyr-lEcole and Saint-Cyr-lEcole. Photo: Bas Czerwinski/AFP via Getty Images

Coming from what seemed like an impossible position, Sam Bennett once again proved exactly why he is the best sprinter in the world with a stunning win in the opening stage of Paris-Nice.

It was a properly hectic bunch sprint in every sense, a crash with 800 metres derailing several of the lead-out trains, only Bennett kept his cool and his nerve, coming from behind in the last 50m to power past both French sprinter star Arnaud Demare and former world champion Mads Pedersen from Denmark.

Despite having to pull hard to his left, Bennett won by well over a bike length, this time affording himself time to hold both alarms aloft in his moment of victory, as well he might. With winning bonus seconds Bennett also takes the overall race lead, four seconds ahead of Demare, and will wear the second most famous yellow jersey in cycling going into Monday’s Stage 2.

“Yeah the guys did a fantastic job again,” said Bennett, paying tribute as he always does to his Deceuninck-QuickStep teammates, Michael Morkov again acting as the main driver of the lead-out train.

“We were a little blocked in for the last 15km, and the nature of sprint here, with the straight roads, was chaotic. Then the narrowing in the last 500m made it very, very tricky, but we planned to get ourselves into the position, and the boys delivered me onto the wheel, rather than do a full lead-out train, with 150m to go.

“Michael again was so calm, he never seems stressed, always seems to get me there, so the whole team was amazing. And happy to finish job.”

Stage 1 was far from straightforward, two loops and 165.8km around the small town of Saint-Cyr-l’École, on the outskirts of Paris, which included four categorised climbs in the three hours and 51 minutes of racing. There were repeated efforts by riders to get off the front in the last 15km adding to the pressure on Bennett but he had ample power reserve.

Bennett also started his second race of the season just a week the Irish rider was denied a hat-trick of stage wins at the climax of the UAE Tour in Abu Dhabi, by Caleb Ewan, having already won Stage 4 and Stage 6, bringing his tally of UCI world tour wins to 51.

“Yeah, I was a bit worried when you come back here the whole day, rather than the last 10km, 20km, that maybe the legs wouldn’t be there in the sprint, but I felt pretty good today, and really happy when my shape. To win in France too is always nice, I suppose it’s where all the big races are.”

It also brings Bennett’s tally to four stage wins in what is the 79th edition of Paris-Nice, the famous Race to The Sunday, as he previously won two stages in 2019 (Stage 3 and Stage 6), plus Stage 3 in 2017.

Both Demare (Groupama-FDJ) and Pedersen (Trek-Segafredo) gave it their best shot, the 29-year-old French rider also in form after winning four stages and the points classification in last year’s Giro d’Italia. Pascal Ackermann of Bora-Hansgrohe was sixth.

All of the main contenders finished in the bunch, including 2020 Vuelta a España winner and Tour de France runner-up Primoz Roglic (Jumbo-Visma) although Richie Porte of Ineos Grenadiers did abandon after crashing some 40km out.

Monday’s stage 2, 188km from Oinville-Sur-Montcient to Amilly, also looks likely to favour the sprinters, before a rolling 14.4km individual time trial that will likely create some gaps between the overall yellow jersey contenders on Stage 3.

The Queen Stage on the penultimate day finishes atop a 16.3km climb in La Colmiane, before the finish into Nice this Sunday: “Paris-Nice is a race with a lot of history, and at the same time, a very hard race,” Bennett said earlier on Sunday. “There should be some nice opportunities for the sprinters, the team is very strong and hopefully I’ll have good legs again so we can continue our season on the same note.”

Which is exactly what he proved.