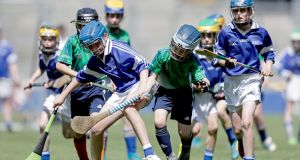 File photo of action between Kilmanagh and Glasnevin ET at the Cumann na mBunscol Finals in 2018. Photo: Laszlo Geczo/Inpho

Ten days from now, a case will come before the High Court in Belfast on behalf of an eight-year-old footballer from Magherafelt, Co Derry. His parents are challenging the Covid regulations laid down by the Northern Ireland Department of Health that effectively prohibit children playing organised team sport during the pandemic. The legal challenge passed its first hurdle in early February when the DoH accepted there was an arguable case.

Making that case will be the solicitor Stephen Atherton. He goes by Stevie on Twitter but, “If you’re going to be quoting me in the august pages of The Irish Times, I guess you better use my Sunday name.”

He is a Glaswegian transplant, long settled in the North, and before we get too deep in the weeds of culture wars, it’s important to explain that he is anything but a Covid denier. He has two asthmatic kids who they’ve been shielding for a year. He hasn’t seen his parents in Scotland outside of a laptop screen in that time either. This is all very real and he takes it all very seriously.

It should also be made clear that the kid involved is just an ordinary child. This isn’t a case of overbearing parents being convinced they have the next Messi in the house. They’re not accusing the NI Executive of hiding him from the Derry branch of the Barcelona scouting system. It’s a mother presenting evidence of an eight-year-old boy showing physical and behavioural deterioration and arguing that the banning of youth sport for nine of the past 12 months is the major contributing factor.

“We accept that the state is entitled to infringe on the human rights of the population on public health grounds,” Atherton says. “That is absolutely true. But legally, you have to do a cost-benefit analysis. What is the benefit of this restriction? We are saying that the benefit to public health of preventing kids playing sport cannot be demonstrated. They can say there are concerns over mobility and the movement of people but that is not evidence.

“In fact, the scientific evidence shows how minimal the dangers of transmission between children are. We also argue that not only can they not demonstrate any benefit to public health, they haven’t undertaken an appropriate consideration of the harms that these measures are causing to children.”

Wherever it goes and however it ends, the case will live on for decades as a monument to the surreal times we lived in 2020 and 2021. The UK judicial system has plenty of checks and balances that ensure frivolous lawsuits get dealt with long before the eye-wateringly expensive steps of the High Court are reached.

Not only has the original judge put it forward for judicial review, the authorities made no argument to contest. They will no doubt be vigorous in their opposition on Thursday week but they at least accept that there is something serious to oppose.

This is where society finds itself at this stage of the pandemic, fighting amongst itself over something that in normal times would be the easiest issue on which to find consensus. Nobody is against kids playing sport. Not even the most virulent critics of government here, in the North or in the UK would say that was the case. The argument is over the degrees to which various sides can stomach the state of affairs where no kids are allowed to play.

It is obviously far too early to guess where we are in terms of the pandemic being over. If there’s a lesson to be taken from the past 12 months, it’s to never presume things can’t get worse. We don’t know if we’re near the end, the middle or even just the beginning of it all.

We know this much for certain, however. We are definitely at the stage where vast swathes of the population are of the view that they have done their bit, and that while they are willing to go on doing their bit, they need to start taking their lives back while doing so. This is an entirely reasonable attitude to adopt. It has neither the fecklessness of the open-everything-now brigade nor the unrealistic faux-simplicity of the Zero Covid crowd.

So when it comes to something like kids playing sport out in the open air, reasonable people are at the point where they need something better than to be told that this is just not possible. It is accepted by all sides that it is pretty much unheard-of to transmit Covid by playing outdoor sport. Only yesterday, it was reported in The Sunday Times that in 12 months of detailed tracing of positive Covid tests in professional soccer, American football, rugby league and rugby union, there hasn’t been a single case of on-field transmission. Not a single one.

Sport is safe to play. Every sport in Ireland is chomping at the bit to get back going again. Every one of them is willing to jump through any and all hoops to make it happen. The Department of Sport in Dublin has had submissions from over 40 National Governing Bodies proposing how it can restart running sport for kids. These are serious people watching a generation of children drift away from sport.

Nobody is saying this is as simple as telling every sports club in the country to throw open their gates next Saturday morning. But we should at least be at the point where the ground is being prepared. It’s bad enough that the logistics of the vaccine roll-out makes it look like we as a country were only told it would be needed the night before it happened. Let’s not make the same mistake with starting kids’ sport again.

Politicians sadly shaking their heads and blaming the big bad wolves in Nphet isn’t good enough. This is the gig, this is what the votes were for. The job isn’t about telling the people they can’t do things that are safe.

If you think it is, you’ve really lost your sense of public service. Don’t be surprised when people make the determination that the basic wielding of power is your true motivation.