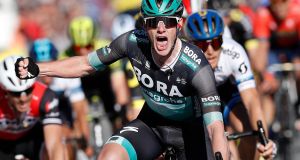 Three days after winning stage three in Paris-Nice, Sam Bennett doubled up when he took a second victory on Friday’s sixth stage of the event. The Irish sprinter showed superb acceleration on the race to Brignoles, overhauling French man Arnaud Démare (Groupama-FDJ) just before the line.

Bennett’s victory is his fourth of the season and shows he is in superb form heading towards the first Classic of the season, next Saturday week’s Milan-San Remo. The hilly terrain on Friday had made a sprint unlikely but Bennett said afterwards he was determined to dig in anyway in order to test his legs. In the end, his form was good enough to finish at the head of a front group whittled down to just 41 riders by the climbs.

“I wanted to go hard today, just for Milan-San Remo,” said Bennett. “On the second-last categorised climb I didn’t think I was going to make it [with the leaders] but I came around. The guys [his Bora-Hansgrohe team-mates] were doing a fantastic job. In the last 5km my legs were really good. I knew I didn’t have to panic with regards positioning. I tried to follow my team-mates as best as possible.”

Bennett’s strength was such that he was confident heading into the sprint, but placing was still important heading towards the crucial final 200m. “The gap nearly closed on me in the final but it opened again and I was able to kick really hard,” he said. “I was really happy and I want to thank the team again.”

Bennett’s three stage wins in last year’s Giro d’Italia plus his showing on difficult terrain on Friday mark him out as a man to watch heading towards the big Classic. “I have been working really hard this winter, with my first target being San Remo. Things are on track,” he said.