Fastest, highest, strongest: a new motto for the Tokyo Olympics 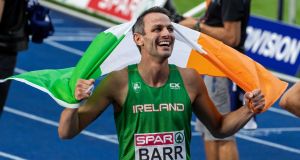 Con Houlihan always told me the good sportswriter will find the best stories in the losing dressingroom. Because that’s where we see more of ourselves, the hurt and regrets and the mistakes we can’t take back.

“Where would we be if we had won this game?” asks legendary Canadian curler Al “the Iceman” Hackner, after his team somehow conspired to lose the 1981 national championship. At the bar, they all suggested. “Well, then, let’s go,” he says.

That’s just one of the best stories in Losers, the Netflix documentary series now streaming on a laptop near you. Each of the eight episodes provides ample evidence that our obsession with winning has nothing on the value of losing, and how the properly lasting lessons of life can come from defeat as much as victory. Besides, most of it comes down to luck anyway.

Losers also tells the story of the French golfer, Jean van de Velde, and his catastrophic triple-bogeying on the final hole of the 1999 Open. Of course life goes on, as it does for Torquay United after their crazy 1986/87 season at the bottom of the English football league, decided in part by the vicious bite of a police dog. For boxer Michael Bentt losing his 1994 heavyweight title unquestionably saved his life.

Old Baron de Coubertin had a lot of things in mind when he came up with his trusty Olympic motto “citius, altius, fortius”, only from day one it wasn’t the winning that mattered, but the taking part. Just as the important thing in life is not to triumph but to struggle. Or should that be the other way around?

Either way, the Olympics appears to have taken a definite shift towards the winning enclosure this week, while also shutting out more of the so-called losers. For some it felt like a badly timed joke, the IAAF releasing their eight-page qualifying criteria the day before Tokyo 2020 announced their 500 Days To Go campaign. So near, and yet so far – and more a case of citissim?, altissim?, fortissim? (and you have my Leaving Cert Latin to thank for that.)

By way of brief summary, the old qualifying standards have been replaced by a new dual qualification process: qualifying standards still apply, only they are now a lot faster, higher and stronger, while athletes can also gain selection via their world ranking, a new system of scoring/points/positions announced by the IAAF earlier this month, which requires a minor dissertation in statistics to understand.

No wonder it has divided opinion – some suggesting this will help eliminate those sometimes chance qualifications, which don’t always hold up on the Olympic stage, others reckoning the world ranking position may in some events actually ease qualification. Meanwhile the race is already on, the 10,000m, marathon, race walk, combined events and relays open since January 1st, other events opening from May 1st, before everything closes on June 29th, 2020 – just over three weeks before the Tokyo Opening Ceremony on July 24th.

Truth is no one will fully understand how that world ranking system will have worked until the near eve of the Tokyo Olympics. The new qualifying standards are at least clear in that in many events they are unattainable, and not just for Irish athletes: most are significantly faster, higher and stronger than the Irish records, while events such as the men’s 10,000m (27:28) and women’s 800m (1:59.50) would require the breaking of barriers and records to reach Tokyo standards. That great melting pot of the US Olympic Trials won’t be same either.

Qualifying for the Olympics has never been easy or straightforward, nor should it ever be. Part of the issue here is the reduced quota of athletes for Tokyo, to help make way for those new events such as skateboarding, rock climbing, surfing, and BMX freestyle. The Tokyo Olympic marathon, for example, is limited to 80 men and 80 women, roughly half the number who got to run in Rio. If the cut-off date for Tokyo was right now the only Irish athletes to qualify on the track or field would be Thomas Barr in the 400m hurdles and Ciara Mageean in the 1,500m; Sinead Diver is inside that very fast 2:29:30 women’s marathon standard, the only problem being she’s now running for Australia.

Trace the trail of Irish Olympic medal winners and very few of them would have qualified if these standards had also applied in their day. Pat O’Callaghan only discovered his hammer-throwing talents 13 months before the 1928 Olympics in Amsterdam, his selection requiring a considerable leap of faith. At age 22, more focused on building his medical career, O’Callaghan was also made pay his own way to Amsterdam, only to win the gold medal with his final throw of 168ft, 7ins, over 13ft better than his previous mark, and with that raising the Irish tricolour and playing Amhrán na bhFiann for the first time in Olympic history.

It took a church-gate collection and another heroic effort for O’Callaghan to defend that Olympic title in Los Angeles in 1932, where Bob Tisdall also won a gold medal for Ireland in the 400m hurdles, selected despite racing only three times ever before in the event. The Tisdall of today would get nowhere near Tokyo 2020.

Ronnie Delany was also a close call before Melbourne 1956, his selection at age 21 only decided on a casting vote: a heel injury sustained in Paris that July meant he only raced twice more that summer, both of which he lost. Had Delany been relying on some world ranking system he might never have won that 1,500m gold medal.

And forget about John Treacy winning his Olympic marathon silver medal in Los Angeles in 1984. Treacy had never even run any marathon before, his chance selection without a standard or world ranking repaid with one of the most heroic efforts in Olympic history.

Likewise with fellow Waterford athlete Thomas Barr, injury-raged in the weeks before Rio, only to run three successive season bests to reach the 400m hurdles final, his 47.97 in fourth just .05 of a second short of Olympic bronze. If that was Tokyo 2020 chances are he’d be watching from back home – as my dad might have been for the last Tokyo Olympics in 1964, instead of still talking about the hurt and regrets and the mistakes he can’t take back from his 5,000m heats.

The Olympics should be the pinnacle of every sport, ultimately remembered for the winning of medals as much as the stories that lie beneath, the risk being Tokyo 2020 may reduce much of that in ways not yet understood.

1 Worst sporting moment: White knuckle ride on a hate-filled night at Windsor
2 Worst Sporting Moment: Mighty Nijinsky misses moment of triumph
3 Rugby to return in England with rucking but no hugging
4 Acute disillusionment the only response to growing FAI debacle
5 Brennan concerned over scale of the challenge facing the GAA next year
Real news has value SUBSCRIBE

Australia’s limited overs tour of England gets the all clear 09:21
Rugby to return in England with rucking but no hugging 08:15
First pro rugby player in Ireland tests positive for Covid-19; Leipzig into final four 07:44
Prospect of magic number proves elusive at Wyndham Championship 07:08
Worst Sporting Moment: Mighty Nijinsky misses moment of triumph 06:00
Here is your handy guide to sport on television this week