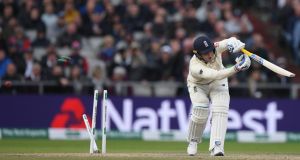 Now it is getting serious. There are seven days left in the series and it remains uncertain who is going to prevail. It is getting to the nitty gritty and this was reflected by England’s batting, the best of which was, unusually, characterised by its grittiness. Rory Burns, who delivered another gutsy knock – of 81 – dug in alongside his captain, Joe Root, who was in the most pragmatic of moods, in a partnership of 141, which at least allowed England fans to hope that the pursuit of the Ashes will still be alive when the sides reassemble at the Oval next week.

However there remains the possibility of close to 200 overs in this match and the forecast is fine. There is an awful lot of batting to be done for England to draw especially as the ball is starting to turn more extravagantly for Nathan Lyon. At least Burns and Root have demonstrated the route to survival.

Play was delayed until 1.30pm but it did not take long for the Australians to make further inroads. Craig Overton, reassuringly calm on Thursday evening in the unaccustomed role as nightwatchman, was dismissed in the second over of the day by Josh Hazlewood. He pushed forward and edged to second slip where Steve Smith held a sharp chance.

So once again Root was at the crease before the score had passed 30. The England captain is getting plenty of practice against the new ball in this series. At the other end was the increasingly reassuring sight of Burns, now in his 11th Test and regarded as something of a stalwart.

Mitchell Starc beat the outside edge of Burns’ bat three times but the Surrey captain remained almost as imperturbable as his predecessor John Edrich used to be after failing to make contact. Then Pat Cummins was summoned from the Statham End and he also provided problems, mostly from short deliveries directed at Burns’ chest; they were not short enough to duck, yet hard to defend safely. Burns looked uncomfortable without being flustered, one of his great assets. He weathered that storm adroitly.

Before long Lyon was introduced and he found slow, consistent turn. The Australian off-spinner has tormented left-handed batsmen in recent times, yet Burns has played him well with his own idiosyncratic system. Given the slightest encouragement he plays the cut shot. The ball from Lyon does not have to be very short or wide for Burns to rock back on to his stumps and hit the ball away square of the wicket. Often Lyon’s arms would go up in anticipation but Burns, ever-eager to stay on the back foot, jammed his bat down in time. It seemed surprisingly easy for this left-hander to get to the other end. The blunt truth is that Lyon has bowled better to Ben Stokes in this series than to Burns.

In fact Lyon proved to be much more of a problem for Root, who is usually such an effective player against spin bowling. Yet he was tied down by the off-spinner and his attempts to break free were seldom convincing. He swept occasionally; once or twice he came down the wicket. Yet he was never able to impose himself during a high-quality duel. This would not be one of Root’s silky innings.

There was a constant distraction for Lyon. The fans in the massive temporary stand, now renamed the party stand, decided to give their full attention to Lyon, focussing on that missed run-out at the end of the Headingley Test. Every time the ball was thrown back to Lyon during his spell, they cheered raucously when he gathered the ball cleanly.

Lyon and his teammates seemed mildly amused – to start with – but the impression grew that the novelty was beginning to wear off for the Australians after about an hour.

The partnership was given a boost when Starc returned for his second spell. Suddenly he leaked 20 runs from two overs, mostly from the bat of Burns, a reminder of why the Australians have been reluctant to pick Starc throughout the series. As a consequence the pressure eased a little; the hundred partnership was posted and it was time for tea.

After the break Tim Paine tossed the ball to his best pace bowler in the series, Cummins, and he got the appropriate response but no immediate reward. Cummins bowled another fine spell that was both hostile and accurate. His short balls troubled Burns, his fuller ones Root. When England’s captain was on 54 he flicked towards the leg-side yet only edged the ball between Paine and the first slip, David Warner. Neither man moved and Root was on 58.

In his exasperation Paine reviewed an lbw off Cummins, but, almost in the manner of Smith, Root’s leg was struck outside the line of off-stump, another “emotional” Aussie review. Then there was a long delay since Root was in pain from being struck on the right leg by the ball. Root soldiered on. He has seldom scored uglier runs for England, but he was not bothered about kudos for artistic impression. Burns fell – in a typically respectable manner – edging a fine delivery from Hazlewood to second slip. Soon after Root was unreviewably lbw for 71 to the same bowler and the route to safety suddenly seemed perilous, even more so when Jason Roy became Hazlewood’s fourth victim, clean bowled for 22. – Guardian