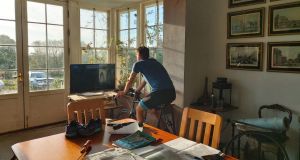 Tim Norwood was one of four youth sailors who circumnavigated Ireland by stationary bike using the Zwift app over 11 days in aid of the RNLI lifeboats . The four raised over €8,000 for the lifeboat service.

Four young sailors who “virtually” circumnavigated the entire Irish coastline on bikes have quadrupled their target funding for the RNLI lifeboat service.

Dublin-based dinghy sailors Max Goodbody (16), Nathan van Steenberge (17), Tim Norwood (17) and Sam LeDoux (15) were joined by Olympic silver medallist Annalise Murphy for one of the legs of their 2,077 km route over 11 days .

The four, and their sailing coach for the 29er high-performance dinghy class, Thomas Chaix (42), had reached Donegal by Monday of this week. They covered the entire north coast on their stationary bikes at home in one day, pedalling down the east coast to finish with over €8,700 raised.

Former professional cyclist and coach Matteo Cigala, who is based in Dublin, joined them for their final leg early this week, down the east coast to Dún Laoghaire on stationary bikes.

The quartet, who had been training for the Youth World Championships before the pandemic struck, relied on the Zwift app for their virtual cycle, which took in Ireland’s coastal lifeboat stations and included 14,000 metres of climbing.

“All of us are sailors and appreciate the work of the RNLI, and understand how dangerous and unforgiving the sea can be. We are thankful for the bravery of the lifeboat volunteers who go out and risk their lives for others in all weathers,” the four said.

Each one of the riders took on the full distance, juggling school work online with the daily challenge.

“The initial target was €2,000 but they raised that so quickly that they extended it, and raised four times that amount,” Charlotte Norwood, mother of Tim, said, describing how the family set a fan in the hall while her son pedalled for hours.

The GoFundMe page for the virtual cycle stays open till the end of May.