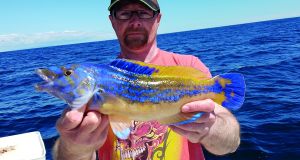 Robert Vaughan with his specimen cuckoo wrasse of 36cm, caught in Cork Harbour, in June 2019

The Scottish government has identified 12 groups of hazards, including fish farming, that may contribute to the decline of wild salmonids.

It is well known that interaction between aquaculture and wild salmonids is controversial, and many strong views are held from different perspectives, according to John Goodlad, chair of the Salmon Interactions Working Group (SIWG).

It was against this background that the working group was established. At the outset it acknowledged that reaching a consensus on the way ahead would not be easy. However, all members recognised the importance of the task in hand and embraced this challenge.

The agreed recommendations reflect the professional approach taken by the group and their determination to address these difficult issues in a constructive manner.

The report is deliberately kept short and focuses on what could be done to make things better and, accordingly, has produced 42 recommendations. Although these cover a large number of issues, it is believed they complement each other.

To that extent they are presented to the Scottish government as a package of measures which should be implemented in full. If accepted, then Goodlad believes it will be possible to build a robust and durable framework that will minimise the impact of fish farming on wild salmonids.

Once implemented, it says, the proposals will reward best practice while ensuring that appropriate sanctions are available where operators fail to meet the far-reaching measures.

Crucially, the new regime would put the protection of wild salmon and sea trout at the centre of regulation at a time when stocks are approaching crisis point.

Dr Alan Wells, chief executive of FMS, said: “We welcome the publication of the report, which sets out a comprehensive suite of recommendations. It is vital that Scotland’s government and regulatory authorities do everything in their power to safeguard these [two] species.”

Atlantic Salmon Trust (AST) has also welcomed and endorsed SIWG’s wide-ranging recommendations. “We would like to congratulate, in particular, Fisheries Management Scotland and the Scottish Salmon Producers’ Organisation for reaching agreement on these recommendations,” Mark Bilsby, chief executive of AST, said.

The AST is now eager to work with all parties to help translate the recommendations into substantive delivery and to support the new regime, as it is important now more than ever to put the welfare of wild salmon and sea trout first in all that we do.

If implemented fully by Scottish ministers and the relevant agencies, it will represent a vital step change in efforts to recover wild salmonid populations, he said.

The full report is available at: http://fms.scot/wp-content/uploads/2020/04/200430-Aqua-Summary-of-SIWG-Recommendations-for-FMS-website.pdf

Great to receive the Sheelin report again following the enforced closure due to Covid-19.

The Mayfly season is now under way, according to Brenda Montgomery, with anglers targeting the mayfly trout with nymphs and traditional patterns of grey, ginger, green and yellow.

The fall of spent is sporadic but, if in the right place at the right time, using the right fly, then you stand a good chance of catching a trout. Towards the end of last week the lake shifted up a gear and most anglers caught three or more trout averaging 3 to 4½lbs.

The best areas for fishing were Stony Island, back of Church Island, Merry Point, Wilsons Point, Inchacup, Chambers Bay and from Kilnahard down to Crover, Bog Bay, Sailors Garden and into Goreport.

It was all buzzer and mayfly patterns with dry buzzers and wet mayfly patterns topping the pole. Goslings, Mosley May, French Partridge and a host of mayfly versions, both wet and dry, proved most successful.

Biggest fish for the week weighed 6½lbs on a Mayfly nymph and total number of trout recorded was 131.

Specimen of the Week

Our photograph this week, as recorded in the Irish Specimen Fish Report of 2019, features Robert Vaughan with his specimen cuckoo wrasse of 36cm, caught in Cork Harbour on mackerel strip, in June.