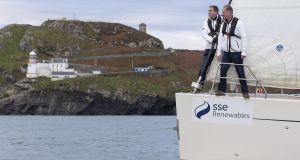 Irish sailing is facing an exceptionally busy season in 2020 with two announcements this week further adding to options for cruiser-racer teams. If co-ordinated, a significant influx of overseas boats can be expected.

Wicklow Sailing Club announced SSE Renewables as their new sponsor for the 704-mile Round Ireland Race and have confidently declared a target of at least 60 boats with plans to grow the fleet in subsequent editions.

Dun Laoghaire sailor Niall Dowling of the Royal Irish Yacht Club has declared his intention to return after winning line honours and the overall victory of the 2018 race on Baraka GP, a specially chartered entry.

Currently racing a Fast 40, he has still to source a suitable boat for the race that stars from Wicklow on Saturday June 20th.

Allowing up to a week for the race depending on the size of entry, home team and visitors alike have the option of a short break before the Royal Cork YC hold their major tricentenary celebrations in their established Cork Week slot in the second half of July.

Feeder races to the event are usually low-key features of big regattas but a re-enactment of the “Kingstown to Queenstown” route will serve Irish Sea entries.

However, the Royal Ocean Racing Club has announced that the Morgan Cup will also be a feeder race from Cowes to Cork along a 324 nautical-mile route starting on July 8th.

This can also serve as a delivery for the IRC European Championships that will also be staged as a standalone event within the Cork 300 celebration but also during Cork Week itself.

With so much happening, logistics and co-ordination will be of paramount importance – not least because the Irish Cruiser Racing Association’s own Irish national championships are also due to be sailed under the Cork Week banner.

While all these events are catering for the bigger, fully crewed boats, clearly not all options will work for everyone and some difficult choices may arise for some crews.

RORC chief executive Eddie Warden-Owen however reckons there are distinct followings and interest groups within the sport and most will be catered for.

He gives the example that some people will compete in the Morgan Cup, join in the Cork 300 celebrations on arrival but not stay for the full Cork Week or necessarily race in the European Championships.

“There’s quite a lot happening in Ireland next year,” he told The Irish Times yesterday. “People can’t do everything and we understand that people will have to make a choice.”

Shorter racecourses will be specially laid outside of Roches Point while a ten to 14-hour coastal race is planned along the Cork coastline during the Europeans giving a flavour of offshore racing.

As for the Round Ireland, Warden-Owen is confident the race can grow.

“If they [Wicklow] need our help we’re very happy to support it – it’s an important offshore race and part of our Season’s Points Championship so definitely a ‘preferred event’,” he said. “It has a mystique and popularity that continues to attract people.”

Meanwhile, having held its inaugural event in Crosshaven in 2016, the 5th edition of the IRC European Championship will take place over five days of racing from Monday July 13th to Friday July 17th 2020.