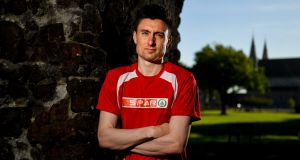 Mark English is putting his full focus on his athletics career ahead of Tokyo 2020. Photograph: Sportsfile

“I can’t go back to being 26 again,” says Mark English, explaining in no uncertain terms why he’s parked his medical career for 2020 and doing everything in his power to qualify for the Tokyo Olympics. There is still no topping the sporting pinnacle.

Some may question the sense or value in that sacrifice: after narrowly missing out on London 2012, English qualified for Rio 2016, making the semi-finals of the 800m, only his most recent experience at the World Championships in Doha in September saw him finish last in his qualifying heat.

English insists he’s parked that too, and all thoughts now are positive and progressive. What he will remember about 2019 was winning his European Indoor bronze in Glasgow in March, his third medal on the European stage, while still juggling his final term of medical studies in UCD.

“You don’t get many chances like this in life,” he says, “and with the talent I have, I want to make the best of it. I can go back and work in medicine for the rest of my life. I don’t have as much time left as an athlete. So I’m doing this for myself, my family, and the close friends that I have.

“Because I know I have the talent. And I can’t go back to being 26 again. To make Tokyo, to be a two-time Olympian, I feel my career deserves that. Last year I won a medal combining training with study, this year I’m dedicated only to the training, to see what I can do for 2020. I can’t say what’s possible, I just want to put myself in the best position I can to achieve it. There’s no guarantee it will all work out. It’s about knowing I’m doing everything I can do.”

Instead he qualified via the event ranking, hardly ideal as he only got seven days notice. A review of the event quota process (where athletes who don’t qualify on time can still qualify on ranking) will take place after Doha, but it’s already been agreed for Tokyo, now just over eight months away.

“So heading to the US on Saturday, five or six weeks training over there with my coach Steve Magness, at the University of Houston. Back for Christmas, then see what I want to do from January onwards. It’s mid-20s out there right, slightly warmer, with all the support I need as well. But some indoors races, in case I do need to qualify through the ranking system.”

Speaking as a Spar ambassador for the Daily Mile, the primary school fitness programme now in place in over 800 schools throughout the country, English sees other positives in the year ahead: he’s no longer hung up on the doping suspicions around the sport, including the Nike Oregon Project, one of their athletes Donavan Brazier winning the 800m in Doha.

“It’s easy to get annoyed, but I’ve honestly taken a back seat, try to enjoy the sport as much as I can. What’s the point? I can only focus on myself. I can’t worry about what Donavan Brazier runs next year. If anything I’m even more excited than I was before Rio. A full athletics stadium in Tokyo, or close to it, and my goal is to be there.”