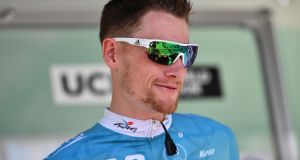 Sam Bennett: he has been part of Bora-hansgrohe and its predecessor since turning professional, but has been passed over for selection for several key events. Photograph: Getty Images

The Irish women’s team pursuit squad raced to a superb fourth place in qualification at the World Cup in Minsk, Belarus, on Thursday, smashing the national record in the process.

The quartet of Lara Gillespie, Mia Griffin, Alice Sharpe and Kelly Murphy recorded a time of 4 minutes 25.389 seconds on Thursday afternoon, the opening day of the first World Cup of the 2019/2020 season. This was almost four full seconds quicker than the time of 4 minutes 29.148 seconds set at the world track championship in Pruszków, Poland, last February.

The improvement will further boost the team morale after a strong European track championship campaign two weeks ago. Shannon McCurley landed an excellent silver medal in the scratch race, while Murphy placed fourth in the individual pursuit.

Thursday’s performance sees the team pursuit squad advance to the first round, which will be run off on Friday morning. Ireland’s riders will square up against the Belgian quartet, with the fastest four teams out of eight then fighting it out for the medals.

Griffin is also due to compete in the women’s scratch race, with other Irish riders also in action over the coming days.

In other news, indications given by Deceuninck-QuickStep manager Patrick Lefevere on Wednesday that Sam Bennett will be able to transfer to the Belgian squad is welcome news to the Irishman’s supporters. Bennett has been part of the Bora-hansgrohe and its predecessor since turning professional but, despite being arguably the best sprinter in pro-cycling this season, he has been passed over for selection for several key events.

The German squad selected the younger, less experienced German rider Pascal Ackermann for the Giro d’Italia, while it backed former world champion Peter Sagan as its designated sprinter in the Tour.

Bennett was not happy and negotiated with other teams. However, Bora-hansgrohe claimed he had given an preliminary agreement to stay with the squad, leading to a long dispute.

Lefevere indicated this week that the situation was heading in the right direction, and that he expected soon to be able to complete an agreement with Bennett. While Bennett’s management agency declined to speak to The Irish Times on the matter, it also indicated that things were progressing in the right way.

Bennett would be the designated top sprinter at the team, and should benefit greatly from its strong leadout squad. He is expected to be given a green light to return to the Tour de France, where he will aim to land the first Tour stage win of his career. He has taken three stages in the Giro d’Italia, plus two in the Vuelta a España.