U23 49er world champions Dickson and Waddilove expected to feature 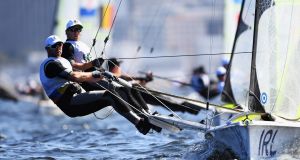 Ryan Seaton and Matt McGovern (who has since retired) competing in the Men’s 49er class at the Marina da Gloria at the Rio Olympics in Brazil. Photograph: Laurence Griffiths/Getty Images

The largest ever Irish skiff squad to compete in a major championship has assembled at Weymouth this week as the summer season for Olympic classes heats up.

Racing begins in Monday on the eastern shore of the famous Isle of Portland on the same waters that the London 2012 Olympic regatta was sailed.

Opposite, on Chesil Beach as part of the pre-event build-up, the class association called on their 400 competitors to the 19-mile shoreline for an environmental clean-up as part of the Sailors 4 the Sea initiative.

The four-boat Irish squad is a mix of three Men’s 49er and one Women’s 49er FX and the numbers reflect the progress of the class in Irish sailing’s performance programme compared to a decade ago when just one boat campaigned.

Back then, the sole campaign featured Ryan Seaton and Matt McGovern but the latter has retired from Olympic level competition leaving his Ballyholme clubmate as the only experienced skiff campaigner in the squad.

Seaton is now paired with Cork’s Seafra Guilfoyle who recently returned to the boat after injury so Weymouth will be both an indicator of form and recovery.

Robert Dickson and Sean Waddilove who won the U23 49er World Championships, in September 2018 and were judged Volvo Irish Sailor of the Year in February are the up-and-coming crew; the Howth/Skerries pairing have enjoyed steadily improving form and are expected to deliver consistently in Weymouth.

According to team management, the third boat featuring Sean and Tadhg Donnelly from Dun Laoghaire are working on their “racecraft” and relying on the European championships to test themselves under full competition pressure.

Meanwhile, although double-Olympian Seaton holds the senior role in the line-up, the squad also includes Annalise Murphy, returning to the venue that brought her so near yet so far from Olympic glory seven years ago and who is now paired with Katie Tingle in this new class of boat.

The Dublin/Cork duo only sailed their first competition two weeks ago in Genoa after intensive training in boat-handling since the start of the year.

As far as results expectations go for the six-day championship, Irish Sailing performance director James O’Callaghan is cautious so early in the season.

“The 49er squad has a senior incumbent in Ryan and it really depends on Seafra finding his feet on return to the boat; I’m certainly expecting to see stronger results coming through during the Summer.”

The cycle of championships and Olympic classes regattas is all heading in one direction – the Tokyo Olympics in August 2020. This event is another marker but the big goal for this year is qualification for Japan and that mean performing well at the World Championships which will be the second qualification opportunity.

“We can expect an ultra-competitive event. It’s an early major regatta happening in May at a well-organised venue that obviously has experience in big events,” O’Callaghan.

“It’s an early-season marker and an important event for the season ahead. Sailors will be looking to get a performance of sorts but [this is] secondary in importance to the World Championships in November.”