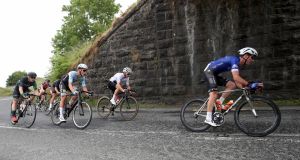 Ronan McLaughlin returns to Wicklow for the 62nd staging of the Shay Elliott Memorial race this weekend aiming to become for the first rider to retain the trophy in since the mid 1970s when Sean Kelly became the only junior ever to win it.

McLaughlin and fellow Team Dan Morrissey rider Conor Hennebry are both amongst the likely contenders for a title that has traditionally been one of the most prestigious on the Irish cycling calendar. Aside from Kelly, previous winners include Peter Crinnion, Peter Doyle, Martin Earley and, in 2015, Martyn Irvine.

The race has suffered somewhat from the absence of the Rás Tailteann this year with a number of overseas riders having previously tended to work it into the preparations for the tour when the timing permitted. That said, a strong domestic field including the likes of Mark Dowling, Ben Healy and Fintan Ryan, who won a Tour of Ulster stage last weekend, is expected on the start-line at 10am on Sunday.

Dowling, who knows the Wicklow mountains well and who lost out to Timmy Barry after puncturing at a critical point in the 2011 event, looks a particularly strong contender to go one better this time around the 160 kilometre course but must contend with the handicap of riding independently.

Birmingham born Healy, at just 18, finished second to Dowling in what proved to be the key third stage of the Ras Mumhan but went on to win his first ever senior stage race. He is expected to race here off the back of that success. Charles Prendergast is another whose form suggests he also has the potential to make a big impact on the day.

The finish this year has been moved to the bottom of Slaughter Hill in Newtownmountkennedy, one of a number of changes aimed at making life a little easier for spectators over the coming years as the organisers at Bray Wheelers look to reinvigorate an event that has a fairly illustrious history.

With the help of new sponsor, Amundi Asset Management, the club hope to grow the event again and restore its status as perhaps the most prestigious of the one day races outside of the National Championships.

“It’s great to have Amundi Asset Management on board,” said Mark Murphy, club chairman. “The race has always enjoyed a special place in the Irish cycling calendar and with their help we hope to build on that in the coming years.

“We are expecting a really competitive field for Sunday’s race and the challenging course with the climb on Glenmalure, with the finish in Newtownmountkennedy, which we think will prove a really great test for the riders and a great experience for those who come along to see the action. As always, we feel the event will do the memory of Shay Elliott proud.”

The riders will, once again, be aiming to take home the trophy, donated by Elliott himself, that he won for being the best amateur in France in 1955. This year’s staging comes 60 years after the Irishman won the Het Volk semi-Classic (now the Omloop Het Nieuwsblad).

John Lackey won the first staging of what was then known as the Route de Chill Mhantáin back in 1958. The host club enjoyed fairly regular successes in the years that followed with Paul Elliott (twice), Noel O’Neill and Doyle following Crinnion’s success in ‘59 but they have not had a winner in since Michael O’Donnell in 1998 and they are lacking a serious contender this weekend.