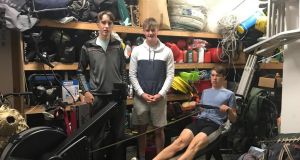 Luke O’Keeffe - Conall Harrington in whose garage the record was achieved - and Jimmy Coughlan.

Two lads went home after competing at the Skibbereen Grand League Regatta at the National Rowing Centre on the Saturday … and set a new endurance world record on the ergometer (rowing machine). They stayed rowing until Monday.

Luke O’Keeffe (17) and Jimmy Coughlan (16) of Presentation Rowing Club set up in a friend’s garage and rowed for 52 hours, two minutes and 35 seconds. They became the world record holders for lightweight under-19 tandem, continuous row.

Jimmy had rowed in a pair at Skibbereen and they both rowed in a double.

The two are fourth year students at Presentation College. The rowing head coach at Pres, Fran Keane, said the two had rested for the first few days of this week, turning up on Thursday at school, having told no one about their prodigious feat.